I just finished watching the 90 minute final episode of the remarkable television show “Friday Night Lights”. I have to say, I think that’s one of the best finales of all time. My knee jerk reaction is to put it only behind “The Shield” and “The Wire” in terms of final episodes. I laughed, I felt my heartstrings get tugged on. I swear, there were a couple of moments where it got a little dusty in my livingroom. Just a little. I’ve yet to officially figure out my all time tv top ten, but it’s a safe bet that if “FNL” doesn’t make it, it will at least received SERIOUS consideration.

It was a remarkable show for many reasons… the acting, the cast, the directing, its business model. There were a lot of reasons why this show was not only praise worthy but noteworthy.

Now it’s over, and I honestly find myself a little choked up. You know, just a little.

“Friday Night Lights” is the story of high school football coach Eric Taylor and his family. It’s also the story of the many people whose lives he impacts.

The show premiered on NBC in 2006, got super low ratings in its first season, yet was a surprise renewal for a second season. Critics loved it, of course, but that’s no guarantee of anything. I recall NBC saying at the time that the show and their renewal of it represented their commitment to quality programming. A lot of industry analysts at the time were saying that NBC was in the tank anyways, none of their programs were doing well, so they might as well look good and keep a critical darling alive.

Well, when the show floundered again in its second season, you had the feeling that two seasons were all we were going to get. Amazingly though, Direct TV stepped in and offered to help with financing, if NBC would allow the episodes to air first “Only on Direct TV”. NBC would air them for their regular audiences in the Spring. Amazingly, even this wasn’t enough to keep the show alive, and it was only through the production staff’s incredible fiscal capabilities – they consistently brought the show in under budget, so they were able to slash the money they asked for for funding considerably – that the show was able to stay alive, even with two parents. It just completed a nice, healthy, five season run. A remarkable achievement in itself.

You could tell just by looking at it that this was a different show. That this wasn’t made like other shows on television. The production crew shot the film in real locations, never on sets. They would shoot one take (as opposed to most tv series, which first film one actor, then get the other actor and splice them together) from multiple angles. This helped the actors be more authentic in their performances. It was more as if the scene were really happening. They shot the show with smaller cameras, which allowed different setups and positioning than normal shows. You got different feel from the look of it. Almost like a guerilla journalism feel. All of these things combined added to the sense that you were watching something real.

Well, that and the incredible acting being showcased.

Connie Britton and Kyle Chandler give two of the most amazing performances in a television show ever. Not only would you swear that the two are married for real, you’d believe it was a GOOD marriage. Each of them is up for an Emmy (again) this year. I can’t think of an actor or actress more deserving. If they wind up winning this year because it’s the shows last on the air, and thus, Emmy’s last chance to recognize them? So be it. That’s how these things work. Sorry Jon Hamm. “Mad Men” still has a few good years in it, don’t worry.

This woman needs an Emmy. NOW.

What the two of them together gave us on this show was an incredible portrait of a working marriage. It never seemed easy, it was fraught with fights and struggles. But they always made it seem worth it. To the shows enormous credit, they never cheapened things by selling the marriage out in order to add drama to the show. These two were committed to each other, and to their family. Beyond that, well, there’s boatloads of daily conflicts and life altering decisions to make. But there was never a moment when you didn’t feel that these two weren’t going to tough it out together forever.

I feel as though one of these days we’re going to look back on this cast and go, wow. I can’t believe this show had all those stars. Aside from the two main adult leads, Britton and Chandler, the show is loaded with young talent. Aimee Teegarden recently headlined Disney’s “Prom”. Adrianne Palicki has been in a couple of movies already, and has reportedly signed on for the next “GI Joe” movie, but she’s most famous at the moment for being the star of the Wonder Woman “Pilot that became nothing”. Minka Kelly never NEEDS to act again – she’s the future Mrs. Derek Jeter – but if she did, her resume already boasts a bunch of film credits, including a main role in the recent “The Roommate”, and a bunch of other tv credits, including being one of the three angels in next seasons “Charlie’s Angels” reboot.

But the real star to keep your eye on will be Taylor Kitsch. He was Gambit in “X-Men Origins: Wolverine”… not exactly a meaty role. But he has the lead as John Carter in next year’s franchise bait “John Carter of Mars”. I’ve read those books, and there’s a wealth of source material to draw from. The trailer looks decent enough, and Disney’s behind it, so at least it shouldn’t be a lackluster effort. The real reason it sounds promising to me though is Kitsch. If “FNL” is any indication, this kid can really act. And he’s got that presence, you know? He just owned “Friday Night Lights” when he was on.

And it wasn’t just the teens, either. The supporting cast was awesome too. Brad Leland was great as Buddy Garrity – who wouldn’t want to watch football with him? And I’ve never heard anyone else call her out, but Louanne Stephens was so believable as a grandmother who was slowly losing it… I mean, I have to say, for those of you who watched it… when she connected with Julie Taylor in the finale? And was talking to her so intently? That was where I thought I was going to lose it. Just incredible.

Really… it wasn’t even just the cast. I mean, it must be easy when you’re given material this rich. I mean, this production crew did NOT strike it rich and find twenty some odd AWESOME actors and actresses. No… this material was a gold mine, it really helped them bring out the best they had inside of themselves.

There was a tone set on this show that was… very very serious. This was not a casual show by any means. It was obvious you were not supposed to come in, have an episode, leave and forget about it. This show was going to make you think and feel about life.

Peter Berg, the director of the movie and the executive producer of the show is quoted as saying that this was how he pitched the show to NBC:

“I want to build up this all-American quarterback, this hero. This wonderful, beautiful kid with his entire future ahead of him. His biggest decision in life was whether he was going to take a full ride to UT or Notre Dame. He’s got the hot girlfriend. He’s got the loving parents. And he’s going to break his neck in the first game. We’re going to create this iconic American hero, and we’re going to demolish him.”

And they did. That’s how they began the first season. By paralyzing the star QB. He never walked again (Although he wound up doing just fine). So, you could say they set the tone for the series right off the bat.

You didn’t think this would be lighthearted, did you?

Even though they hit all the standard teen drama tropes (they had to cover teen pregnancy, for example, its required by SAG), they never seemed to get sensationalistic. They were never exploitative of their teen leads, even though they dealt with sex and a couple of the girls did stints in strip clubs. It always seemed as if the topics were dealt with in an even-handed, realistic manner. Kids drink. These kids drink. They didn’t play it up with the “Drunk Driving Accident” arc, or a “Jessie gets strung out on pills and can’t stop singing” episode. Well, they did have a manslaughter incident at one point – which the creators readily admit was pressure to sensationalize things for ratings – but it’s a testament to the show’s quality that I’m completely willing to gloss over it as if it didn’t happen.

No, instead the show mined drama where it springs from in life. Jobs are lost and relationships crumble. Parents argue with their children. Town politics, school politics. It was as if they created a reality show around the town of Dillon Texas and its football program. 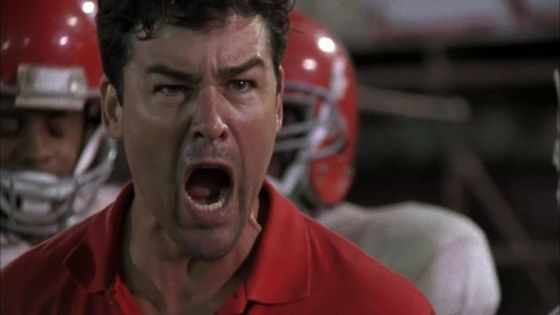 You don’t mess with Coach Taylor

And that in the end, was probably why the show never caught on. Its greatest strength was also its greatest weakness.

People don’t want their fiction to hold a mirror up to their lives. They want a funhouse mirror instead. It doesn’t matter if its horror, or comedy, or drama that’s over the top to some degree… people want their fiction to seem a little more… fictional. I’ve got this saying that fiction needs to be realistic enough to believe it, but fantastic enough to enjoy it. And to a degree, “FNL” failed at that. There wasn’t enough escapism.

But drama fans didn’t mind. Fans of quality tv didn’t mind. We were willing to struggle and strain. To tough it out, right along with these characters. So that when those moments of joy hit… when the team won a big game, or when loved saved the day in a relationship, or when Coach Taylor would tell a kid he was proud and the kid would answer back “Coach, you changed my life”, well, in those moments, we felt like we earned them too.

I feel as though I lived in Dillon for a little while, and I have a lot of friends there.

I already feel like I’m going to miss it there.

2 thoughts on “TV Talk: A Eulogy for “Friday Night Lights””