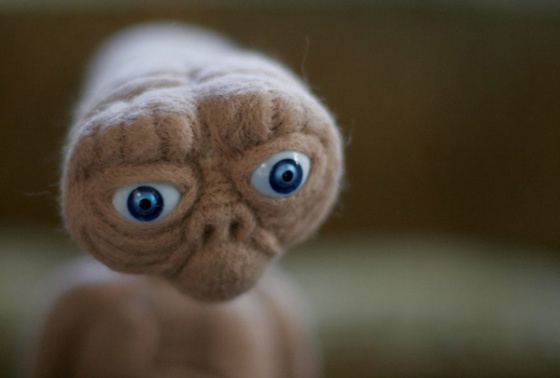 The year is 1982. Steven Spielberg is the hottest director in the world. Perhaps in history, I don’t know, I didn’t live during Alfred Hitchcock’s prime. But I was there for Spielberg’s, and I remember it vividly. In 1982, Steven Spielberg had recently given us “Jaws”, “Close Encounters of the Third Kind” and “Raiders of the Lost Ark”. Sandwiched in between was “1941” (which someday I will address as a “Hollywood Mystery”), but it had to be the least harmful flop in the history of flops. No one saw it, so no one held it against him. It was a comedy, so he was just trying something different… it seemed as if it had never even happened. Everyone was talking about him. Adults, kids, everyone. Everyone was anticipating his next movie. And that summer? The summer of 1982? Spielberg was going to give us not one, but two. “Poltergeist” and “E.T.” 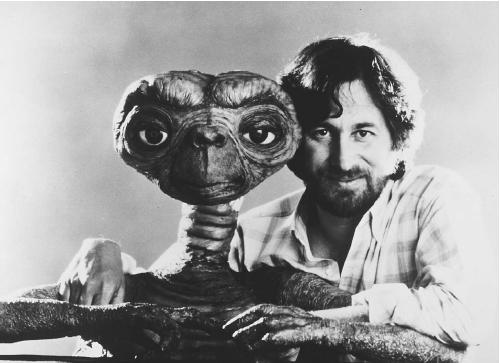 Poltergeist was supposedly directed by Tobe Hooper (of “Texas Chainsaw Massacre” fame), and Hollywood legend debates and discusses how much credit belongs to who. But in 1982, America wasn’t buying any of that shit. We knew whose movie it was, and his name was Steven Spielberg. Opening a mere week before “E.T.” Poltergeist scared the hell out of me (and America). I was probably more than a little too young for it. But it was undeniable that Spielberg had done it again. His crown had a fourth jewel, and this was the lesser anticipated movie of the two.

I mean, we thought this guy was great before this? Phbbt. We thought he was a God now. The guy was literally walking on water at this point. Listen, I’m pretty sure even without “E.T.” in his filmography, America would still have respected and revered him. But because of “E.T.”… We loved him. It’s well documented that Spielberg considers “E.T” his “most personal” film (and I wrote this prior to having come out here and hearing him confess that his attachment to these young actors made him realize he wanted to have children). Perhaps that’s why we loved it so much. But one thing’s for certain, this became a very personal film for all of us, as well.

Notice the quirks of this table and “booth seating”. It’s like something taken out of a mobile home.

Part of that is undoubtedly due to Spielberg’s otherworldly ability to create a realistic suburbia. In “Jaws”, in “Close Encounters”, in “Poltergeist”, and especially here, each of these movies begins with a family that felt absolutely authentic to audiences. Real and relatable. Well, you know what? When you can do that? You get your audience into the picture. It’s that simple. I mean, obviously it’s not easy… but it is simple. And Spielberg was the best. It was like he just chose a family off of the street and set up cameras in their home. This wasn’t Norman Rockwell, folks. You a feeling there were unpaid bills somewhere. These little boys punched each other. The garages had bikes in them, and the bedrooms had toys, and the toys were NOT put away. And because of that, we all felt as though he was showing us us.

This is how we all felt, too, when we first met E.T.

Also, by putting three kids of different ages in the film, he made it easy for the children of that time to relate to the movie, no matter how old they were. If you were a boy or a girl. It just made it easy for us to connect to them. The teen was playing D&D, the boy had “Star Wars” toys, and the girl had stuffed animals, who couldn’t relate? The mother was struggling and doing her best. It just seemed as if this was a home we had all been to at least, if not ours.

And then of course, you had E.T. himself.

A wonder of animatronics, puppeteering and costuming, E.T. reportedly cost $1.5 million dollars to create (a fortune in 1982). This waddling, squat, alien botanist came out of the tool shed and followed a Reese’s Pieces trail straight into the world’s heart. He looked like a shell-less turtle with a retractable giraffe’s neck and a penguin’s walk. We watched as he explored his new surroundings with the wonder of a child. Slowly he developed a limited vocabulary. We watched as he revealed his healing powers on a houseplant, and on Elliott himself. He could make things levitate. He had a glowing heart (“Turn on your heartlight!! Light it shine where ev…”—oh, sorry.). Before you knew it, he was slamming beer and cross dressing. He went out trick or treating for Halloween. I mean, it seemed like he fit right in on earth! And as he progressed upon this journey, he made some sort of psychic and emotional connection with the boy, Elliott. And along the way, he wound up connected to US as well. 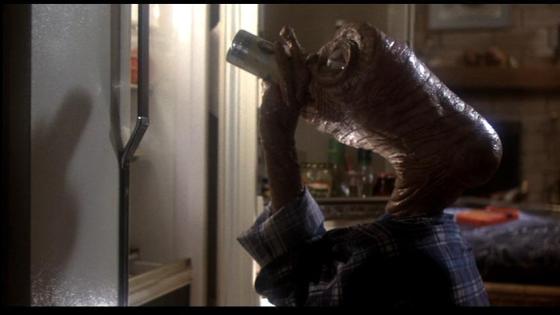 On a non-emotional level, the plot basically follows a couple of paths. The first being, if you were a kid and you had an alien, how would you hide it from your Mom? The other being ET’s desire to “Phone Home” (You can still hear him saying “ET phone home…” can’t you?). In order to accomplish that, ET and the kids build a crudely constructed distress beacon.

On the way to setting it up, Spielberg takes us on a flight of imagination. ET and Elliott take the device out on Halloween night. Elliott stops his bike in the woods and says something to the effect of we’ll have to walk from here. That’s when ET takes over, and uses his powers of levitation to make the bike fly. (“I believe I can fly! I believe I can touch the…”- oh, sorry.) Kids across the world know bicycles as their primary mode of transportation, and here Spielberg took that commonplace experience, the bicycle ride, and turned it into something magical. A magic carpet ride. And as the audience’s heart soared through this shared experience, Spielberg adds one of the most iconic images in film history – the future Amblin Entertainment logo – Elliott’s bike with ET in the basket crossing in front of the full moon. 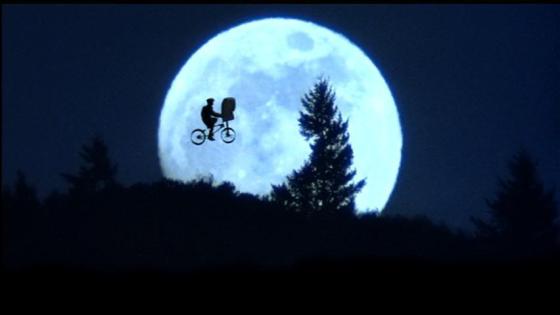 Now, all the while in this movie, lurking in the shadows… has been a government agency that detected the alien spacecraft landing, and now wants to find the creature that wandered off. By this point in the movie, they’re on to Elliott and his pal, and are slowly closing in.

But Elliott doesn’t realize that. He has other troubles at the moment. He’s begun to feel sick. Apparently, ET can’t survive on this planet indefinitely. He’s begun to get ill. In turn, his telepathic emotional connection to Elliott makes HIM ill.

What follows is assuredly one of the saddest sequences in cinema history.

Not my favorite part of the movie.

ET literally begins to turn grey. Sickly looking. Elliot too. And just as Elliott’s panicked mother discovers her dying son and this sickly alien, the government closes in, enshrouding the house in plastic and busting in wearing hazmat suits. So now, not only are ET and Elliott dying, but they’re busted. The Government has ET now and lord knows what they’ll do with him, right? Ostensibly they’re drying to save him from dying right now, but to what end? So they can cut him up later? There’s lots of screaming and crying from the family as the agents go to work on ET, and the audience is panic-stricken over what might happen, and then…

Now that I’m older, I can see why people were accusing Spielberg of shameful emotional manipulation here. I mean, we’re watching a 12 year old’s alien buddy fantasy film, and then all of a sudden we’re watching “Terms of Endearment”. It was gut wrenching. I cried then, I’m pretty sure I’ve cried since then, I’m crying right now just writing about it (Lol, nawwww… jk). But the truth is a) He needed to set up some degree of conflict for the end of the second act, this movie couldn’t JUST be “ET phoning home”. Although he could have done it through the government capturing ET and the kids breaking him out somehow, that would have worked without making us all cry, except… b) He was setting us up for the joy to come.

Yes, one of the saddest sequences in history is quickly followed by one of the most joyous. ET’s “resurrection” and the bicycle chase. Evidently, ET’s kinfolk have heard the distress call and are returning to Earth. Their proximity is enough to revive ET and he miraculously returns to life and full health. The government, thinking that ET had died, loaded his presumed corpse into a van, which the kids steal. They take it a short distance, then get on their bikes. The government is in hot pursuit. A short, adventurous chase scene unfolds where the kids on bikes uses their all terrain capabilities to evade the pursuers, but they can only go so far before it appears as if they’re caught.

That’s when ET puts his powers into full effect and makes them ALL fly.

It’s the high point of the emotional roller coaster that Spielberg has put us on. We grew to love that little thing, then had him ripped away from us, felt the relief and joy wash over us as he came back to life, and now, we soared with him again through the sky.

All that was left in this wondrous film was the denouement. The bikes touch down at the spacecraft’s landing site. ET is going home. Somehow the mom and Gertie pull up with the lead agent. But no one’s in trouble now. It’s time for goodbyes. A teary Gertie gives him the houseplant he resurrected and is told “Be Good” (knowing young Drew Barrymore’s story, this makes me laugh nowadays). The elder brother just touches ETs head and takes one last, wide-eyed look at him. And then, it’s time to say goodbye to Elliott.

Has such emotional weight been carried by so few words in any other movies? I’m hard pressed to think of one. Suffice it to say, Spielberg knew he didn’t need words to get across the sadness. He knows that he’s created an emotional masterpiece. The audience is completely in love with ET, they want him to “Stay”, too. Everyone is thinking “Ouch”. Everyone watching is crying as ET and Elliott share a hug.

Finally, with a glowing finger, ET touches his forehead. “I’ll be right here”, he tells Elliott.

He might as well have been telling all of us.

Because even 30 years later, he sure as Hell is.

That’s why this is a “Movie that Everyone Should See”. 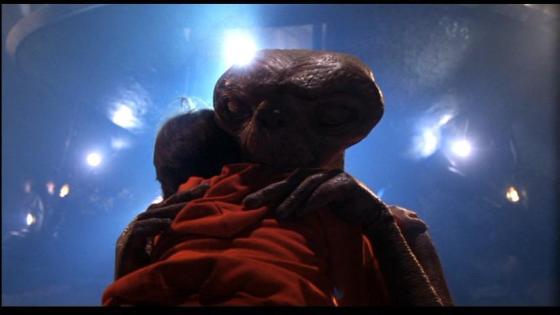 9 thoughts on “Movies That Everyone Should See: “E.T.””