The Snobs against the Slobs.

I’m alright.
Nobody worry ’bout me.
Why you gotta give me a fight?
Why don’tcha just let me be?

Inarguably one of the greatest comedies of all time.

It tells the story of a golf course beset by rodents and reprobates. Yet the club’s owner is so comically stuck up that you root for them to take the club apart.

“Caddyshack” was written by Harrold Ramis and Douglas Kenney, they same duo that brought the world “Animal House” just a few years prior. They were joined by Brian Doyle Murray, and together the three of them penned a comedy revolving around their youthful experiences on the golf course.

Thus the “main character” of the film is Danny Noonan. A young caddy who isn’t sure if he wants to go to college. Even if he did, he doesn’t know how he’d pay for it. Fortunately, he’s an excellent golfer, and the club he works for, Bushwood, offers an annual scholarship to one lucky caddy. Unfortunately, this would involve schmoozing with the club’s detestable owner, Judge Smails. So Danny’s big question is: will he sell out?

But we all know this isn’t a movie about Danny Noonan.

No, “Caddyshack” is an incredible comedy because it has four legendary comedians injecting four distinct styles of comedy via four hysterical characters. Like a Baseball team with four future Hall of Fame pitchers in the rotation, together these four actors combine to create an unforgettable movie.

Judge Smails, mentioned above, was played by Ted Knight. Knight was best known for his work as Ted Baxter in “The Mary Tyler Show”, one of the most famous, beloved sitcoms in television history.

As Smails, he creates a character who is just skin crawlingly stuck up. He’s a blustery pompous buffoon of a man. He even dresses like an obnoxious snob. In addition to holding the caddy scholarship out in front of Danny Noonan like a kissing up carrot, he does his level best to preserve the exclusivity and haughty airs of the country club.

Czervik is the work of legendary stand up comedian and movie star Rodney Dangerfield. It was his first movie role. It’s arguably his best.

With his bug eyed, overweight looks and his eyesore outfits (take a second look at the picture above), Dangerfield’s Czervik bursts onto the Bushwood scene much to the chagrin of Knight’s Smails. He walks around and loudly insults everything in sight, tossing off offensive one liners like an obnoxious Henny Youngman. After he’s derided every aspect of the golf club, and driven Smails to the point of near insanity, he manages to get the Judge involved in a high stakes round of golf.

Of course, Czervik has a ringer. Ty Webb.

If it weren’t for Clark Griswold, I think I would have called Webb Chevy Chase’s most memorable character, and each of the stars of the movie would all have put their greatest work forward in the same film.

Independently wealthy, obsessed with golf, and an amateur zen philosopher, Webb is the best golfer at Bushwood. He’s also the most appealing candidate for Smail’s attractive niece, Lacy Underall. Between bedding his niece, rejecting the values of Bushwood (such as keeping score) and joining Czervik in the big money game, Webb is yet another thorn in Smails’ side.

Chase smirks and winks his way through the movie, tossing off quasi-philosophical jargon about golf, and giving questionable mentoring to young Danny Noonan. He’s at his effortless best here, as if everything in the world is easy. Webb is extraordinarily non-chalant about everything that goes on in his life, but he comes down on the right side of the Snobs vs Slobs battle.

And yet, amidst this embarrassment of comedic riches, the funniest, most memorable character as yet to even be mentioned. 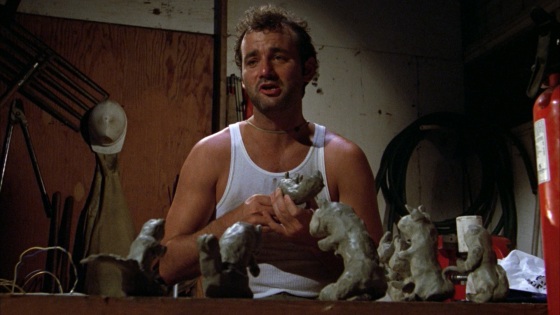 Spackler is slovenly, stupid, and probably smells bad. He lives in the equipment shed out back, where he is growing his own marijuana hybrid. Though he’s part of the greenskeeping staff, he happily spends one scene talking to himself and golfing the heads off of a row of flowers. His basic storyline involves him being tasked with killing a gopher that’s begun to burrow on the course. That’s it. Just… Kill the gopher.

And yet, it’s quickly apparent that the gopher is smarter than he is. 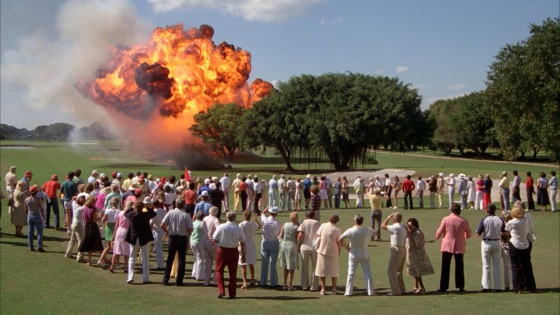 Four great comedians. Four classic characters. All wrapped up in a hysterical movie. The premise will never grow old. The snobs vs the slobs. And in the end, the “slobs” literally blow the course up at the end. Mingled in is some solid coming of age stuff, some zen humor, and lots of funny, funny golf material.

It’s like Ray told me earlier this week when we were talking about it, every single scene has something funny (although I think we both forgot the “Maggie” scenes). He’s got a great point. Think of all the scenes that I haven’t even touched on. The Bishop getting electrocuted. D’Annunzio’s golf swing. Spaulding. The movie is literally bursting at the seams with jokes, one liners, and funny, funny characters.

It’s one of, if not THE, funniest movies of all time.

It’s definitely a “Movie That Everyone Should See”.

9 thoughts on “Movies That Everyone Should See: “Caddyshack””