Welcome back to Hollywood Mysteries. My essay series where I blow steam about things in Hollywood that confuse me to no end, and probably in all likelihood, piss me off.

This series will run all this week, looking back over the entire run of the series. But don’t worry, I’ve had this in the can for awhile. So those of you who aren’t fans of the show won’t “miss” anything, I’ll still be posting up the exact same content this week I would have, Just with this getting posted up as well.

Now, prior to even launching this, I’m going to give two big warnings before you dive in:

1) Spoilers from this point forward. “LOST” was a show that to a major extent revolved around mystery and the unknown. If you click past the “Continue Reading”s on each post, I’m going to assume you’ve either seen “LOST”, or don’t care to, but want to know what the deal is. Because I will be discussing the series in detail.

2) I like to encourage discussion on this site. I am honestly hoping to build a place where I can post something up about movies and tv and then people can post their thoughts. But on this particular subject, I’m just telling everyone. Even a year later, I am still furious. I am “a racecar in the red”. So since “LOST” fans are split into two camps – those that like and accept the end of the show, and those who feel ripped off… I’m just going to put out the warning. If you want to counterpoint, if you’re one of these happy dappy Cuse/Lindelof sycophants, come big or not at all. Because “I am Superfly TNT, I’m the Guns of the Navarone.”

“LOST” was a serialized drama which premiered on ABC in 2004 and ran for 6 seasons.

Created by famed creator (and director) JJ Abrams and Damon Lindelof, the show revolved around the crash of a jet airliner on a deserted island. It doesn’t take long for the cast aways to realize that the Island is unusual in several ways… full of mysteries.

The premiere was reportedly the most expensive pilot in ABC’s history. In order to show authentic plane wreckage, the production team actually purchased a jet airliner, transported it to Hawaii (where the tv show was shot) and disassembled it. The show also sported an enormous ensemble cast, with 14 regular cast members in season 1 and a host of minor characters.

Yup. It was as expensive as it looks.

The Cast was one of the strengths of “LOST” throughout its run. Reportedly, the casting process was unique in that, rather than writing a role and finding an actor to fill it, the producers found actors they liked, then wrote roles to best suit their personalities. It worked. If the actors weren’t tv stars already (Matthew Fox), they would be soon (Evangeline Lilly, Josh Holloway). Dominic Monaghan was on board, fresh off of his stint in “The Lord of the Rings” trilogy. Yunjim Kim was an enormous movie star in Korea prior to her participation here. And Terry O’Quinn, long one of Hollywood’s “That Guy”s finally found the role he was born to play.

The talent of the cast was met by the quality of the material. Each of these characters, you see, was given a thorough back story. Of course, at first you didn’t know what that story was.

This was one of the devices which made “LOST” so fascinating. Each episode contained two unique stories. The first revolved around what was happening on the Island, in the present, and the second was a flashback revealing who these characters were and what they did prior to the plane crashing. It was a brilliant concept, and they executed it well. Each of the characters had some sort of mystery, some uniqueness… A drug addict, a con man, a bank robber, an adulteress, etc… and their stories were slowly revealed to you as the show went on. 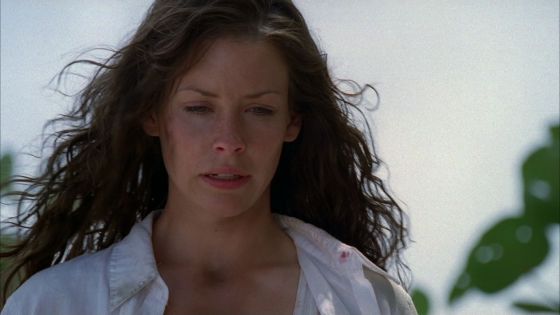 And the interaction of these stranded characters was excellent as well. Romances and rivalries formed. Power struggles ensued. Trust was forged, but so was mis-trust.

But the big star of the show was “The Island”.

The conceit of the show was that this island was not any ordinary island, but an island of unique properties and wonderous phenomena. It had some sort of healing properties. It gave people visions of the dead. Even though it was a tropical island, it was inhabited by polar bears. Deep in the jungle, far away from the beach, was a washed up slave ship. And in the middle of the island, hidden in the jungle, was a metal hatch. To where? To what? They weren’t gonna tell. At least not at first.

But in addition to hosting intriguing mysteries, the island was also a place of untold dangers. It was home to a strange creature, unshown until the end of season one, that blew around the island in the form of a cloud of smoke. It made outrageously frightening noises, like the clicking of a roller coaster going up combined with the roar of a tyrannosaurus. When it grabbed people it would fling them around, or drop them from great heights, usually resulting in their death.

May not look like much, but trust me, you did not want to piss this thing off.

And the island, it turns out, was not uninhabited after all. There were a group of people living on the Island that the crash survivors called “The Others”. “The Others” were first revealed when one of them kidnapped a couple of survivors because the female survivor was pregnant. He was almost killed, and eventually she returned, walking in a daze from the jungle… but it was creepy nonetheless.

All of this weirdness, this mystery, these questions… led to a unique television experience. It was not only a top 20 show, it was a hotly discussed show, a debated show. People would speculate and post theories on the internet. They’d buzz and talk at work and email each other. What WAS the Monster? Who WERE the Others? Why did they want the pregnant woman? What’s in the hatch? How did the Polar Bears get there? Why are people having visions and seeing dead people? How does the island heal people?

Lost was FULL of mysteries to ponder.

It seemed as though there were thousands of questions.

But that was ok. From the get go, the people behind the show (With Carlton Cuse replacing JJ Abrams now) insisted they knew where the show was going. They had a show “Bible” with a broad outline that would take them through to the series end. They knew the answers to the questions the show was posing. This was not going to end and leave us hanging.

And I wasn’t alone. “LOST” won the Emmy for best drama in its first season – a practically unheard of occurrence. And Abrams won an Emmy for best directing (the pilot) It was nominated for and won a bunch of other different entertainment awards and landed on about 1,000,000 year’s top ten lists. Even though it’s tied in my mind to the rest of the series, I still have to recognize that “LOST” Season 1 is one of the greatest individual television seasons of all time. 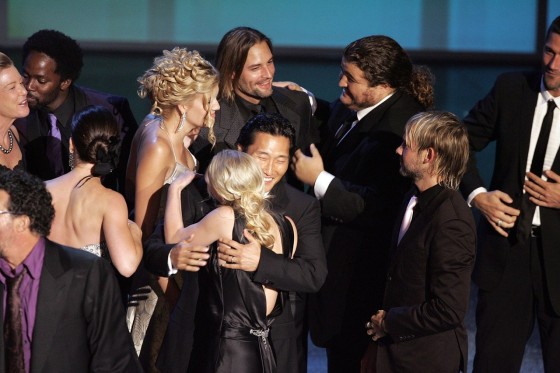 The cast of “LOST” had a lot of reasons to celebrate in 2005. The show won 6 Emmys that night. Especially impressive for a rookie show.

But somewhere, deep down, I knew. At that point, I was so high on the show that it was coming out with the wrong emphasis, but I knew.

What I should have been worried about was how I’d view it if the show BOTCHED the landing.