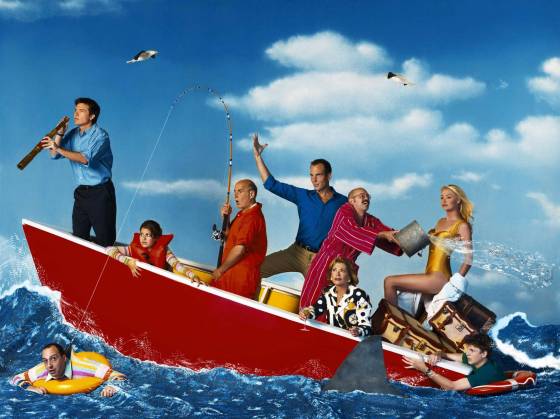 News broke yesterday out of The New Yorker festival that “Arrested Development” would be returning to television for an abbreviated tv season prior to release of their long-awaited movie.

Creator Michael Hurwitz announced that they will be shooting nine to ten episodes, with each revolving around a single character from the series, in order to catch audiences up with what the members of the Bluth Family have been up to for the past five years. Producer Ron Howard confirms.

My question to you is, Can you freaking believe it? 😀 😀 😀

Rumors of an “Arrested Development” movies have been swirling since the series was cancelled by Fox in 2006. It seems as though every member of the cast has had some rumor to share, opinion about its chances, etc etc. At various points in time, we’ve heard it couldn’t get funding, that Michael Cera was holding it up, and that too much time had passed. Well now, apparently, not only will we be getting a big screen movie, but a return to the small screen as well.

From all indications, the entire original cast will be participating: Jason Bateman, Michael Cera, Portia  DeRossi, David Cross, Will Arnett, Jeffrey Tambor, Jessica Walter, Tony  Hale, and Alia Shawkat. No word yet on what network will air the episodes… Netflix is even mentioned as a possibility. But trust me, someone will pick it up.

I couldn’t be more excited.

I waiver back and forth between “Arrested Development” was tragically cut short and thinking that its cancellation after three seasons was a blessing in disguise… killing the show before it had any chance to erode in quality. The timing seems right for this though, for sure. If anything, “Arrested Development” has grown in stature since its original tv run. Obviously they weren’t getting a large enough tv audience to sustain a network sitcom, but on DVD and in reruns, its found a fanbase at last.

If you’ve never watched it, it’s my highest possible recommendation. A++ It’s easily one of the funniest shows ever in the history of anything ever historical. In history.

So what do you think? Are you as excited as I am? Do you have any hesitations, like… a movie franchise that returns for a sequel too many years after the fact? I can’t get over it, I’ve smiled just thinking about it several different times today!

12 thoughts on “News Worth Sharing: “Arrested Development” returning for mini-Season on TV, then Movie”