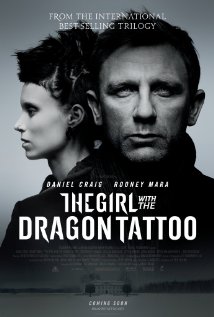 As everyone probably knows by now, “The Girl With the Dragon Tattoo” is a remake of 2009 swedish film directed by Niels Arden Oplev and starring Noomi Rapace and Michael Nyqvist. Whether Fincher went back to the source material (both films stem from a trilogy of novels by Stieg Larsson) or remade the swedish film directly, I’m not sure… regardless, the source material has been filmed before, and thus comparisons will inevitably be made.

Except by me, here.

As a big fan of Fincher’s previous films (“Se7en”, “Fight Club”, “The Social Network”, and the hugely underrated “Zodiac”), I had avoided all things “Girl” until this movie. I wanted my first introduction to be his, and I’m so glad I did that right now. So glad. As soon as the movie ended, the people in the theatre began comparing this one to the original “This was missing,” or “That was different”, and I was so blissfully free of any of it. We can debate the merits or lack thereof of remaking foreign films later… I’m certain I will eventually. I’ve promised roughly 643 people that I will watch the original. For now, I was supremely satisfied to be able to look at this movie as a movie in and of itself.

What it is is a movie for people who appreciate cold-blooded, bad ass movies. Awesomeness that burns on the way down like a 100 proof shot of booze. Movies that kick you in the balls a little before they’re done with you. Fincher has crafted a dark masterpiece here. everything is gorgeous… cold, stark, bleak… but beautiful. There’s a feeling of doom running throughout. A foreboding. He’s somehow managed to make the dread visceral. Palpable. It courses through the movie like blood. Cold blood.

“The Girl With the Dragon Tattoo” is the story of a journalist – Mikael Blomkvist (Daniel Craig) who is hired to assist a family with a cold case. 40 years ago one of their members, a teenaged girl, was killed. Now the patriarch of the family wants to know what happened. Even though he realizes that that probably means exposing a dark secret within his own family. The plot is excellent. Under the layers of darkness (which will certainly be the most prominent aspect of the film) lies a first-rate detective story.

Assisting Blomkvist is the titular “Girl With the Dragon Tattoo”, Lisbeth Salander. Salander is a disturbed young woman. A computer genius with a photographic memory. Yet she’s socially maladjusted, a ward of the state, certifiably insane. You do not want to %$&# with her. But if she’s on your side? You would quickly come to consider her the “Ace in the Hole”.

This is her show… she’s an incredible character. Strange, sad, dangerous, unpredictable, unforgettable. As I prefaced this review with, I’m certain that for many people, comparisons between Mara and Rapace will be inescapable. I don’t care if somehow this portrayal was derivative (and at this point I have no idea), she still had to pull it off. And wow, holy lord, that was incredible. Mara is otherworldly here. As in -there are times when one might actually wonder if she’s from Earth. Brilliant. She never once makes you question her. She enables the audience to completely immerse themselves in the magic of watching this quasi-savant with social issues do her thing. I can’t clap loudly enough. Craig, too, was excellent. Haggard and weary, dogged… but the headlines are most assuredly Mara’s.

“Girl” is an intoxicating film. Something from the depressant category – strong and smooth. There are times when you will squirm, or feel a little dirty… your comfort is not Fincher’s concern. Your entertainment is. And here he, he certainly does his thing. This is a movie which easily fits in amongst his best, I’m just wondering if I should put it at the top of his filmography, were I to rank them. It has a long runtime. Epic. 2hrs 40 mins or so. But I never felt it dragged even for a moment. I wanted more. I was spellbound.

And it most assuredly was black magic. The dark arts.

48 thoughts on “The Girl With the Dragon Tattoo”