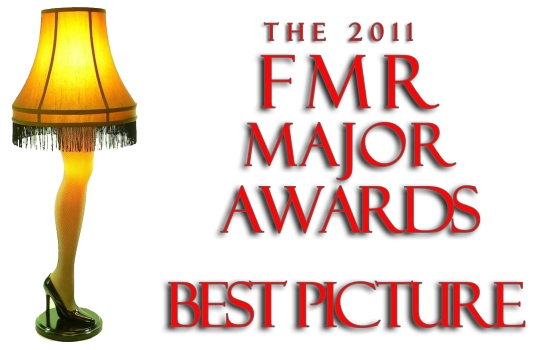 Here it is Everyone.

The major award of the MAJOR Awards.

It’s the biggest question of the week. Which movie is the best? In order to help frame my decision, I asked myself this question… If I could make sure every visitor here saw one movie, which would it be? Because basically, this award equals my TRUE highest recommendation. I gave the trademarked FMR A++ three times this year, but I can only give the Best Picture Leg Lamp once.

Click through to find out which of these ten worthy motion pictures won! 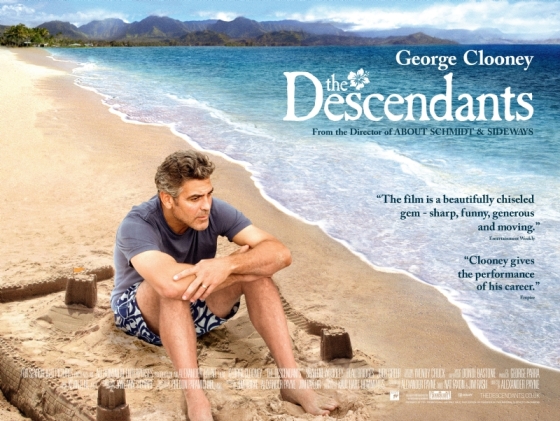 This was an incredibly tough decision for me. I kid you not.

It really boiled down to two movies neck and neck down the homestretch, and I agonized over the choice between them. “The Girl with the Dragon Tattoo” is a high-octane, adrenaline charged, shock filled rush of a movie experience.

“The Descendants”, most assuredly, is not.

For the most part, it’s a gently paced family story that gets some REALLY big laughs along the way, but I wouldn’t call it a comedy. It’s a story about love and loss that has some VERY sad moments, but I wouldn’t call it a tearjerker. It’s a lot of things… It’s a very funny movie, it’s a very touching movie, yes. But it’s also a movie with a lot to say about family, fidelity and forgiveness. Much like life, the movie takes you through a wide gamut of feelings. You’ll laugh, you may cry, you’ll feel sympathy, you’ll struggle with some of the difficult decisions the protagonist has to make. The movie is about stewardship and the choices we make, and how the lives we lead today have ripple effects on future generations.

This is a very entertaining movie, but it’s also a very subtly meaningful movie. I’ve heard more than once already, “I didn’t see what the big deal was”.

Well, the fact that it can be extremely entertaining, get its emotional expressions across, and impart some greater themes… all without being heavy-handed or every once trying to be a big deal or make a big splash… that IS the big deal. With so many movies out there which flash gigantic cue cards when you’re supposed to laugh or cry, it’s wonderful to watch a movie that paints solid characters, lets a believable (but weighty) situation play out, gets you invested in it, and then lets the emotional requests it makes of you come naturally.

Here’s an example. Whereas a movie like “War Horse” blares this huge orchestral score, and drenches the screen in an unnaturally orange sunset, “The Descendants” simply chooses to have the movie that’s on tv be “March of the Penguins”. It’s a totally tiny detail, but far from insignificant.

That “hand” belongs to writer/director Alexander Payne. Payne is the filmmaker behind “Election”, “About Schmidt”, and the sublime “Sideways”. Here, he populates the film with well written, multi dimensional characters. Honestly, there isn’t a single flat character in this movie. Each of them have a backstory, and each have more than one “note” to hit. Then he takes these characters and lets them express a variety of emotions during the midst of a very trying time. To top it all off, he sets the film in Hawaii, which serves many ingenious purposes… it gives the soundtrack a unique and special flavor, it allows for occasionally lush cinematography, it provides contrast to some of the mundane and/or emotionally difficult moments, and it provides stakes for the greater themes by representing our wonderous planet so nicely.

I find his work here genius.

Most of the credit and accolades will probably go to the cast however. I think Clooney is a mortal lock to take home the Oscar this year. I haven’t seen “The Artist”, so I don’t know how good Dujardin was, but personally, I’m betting that Clooney’s popularity, combined with his extraordinary work here, carry the day. I’d love to see Woodley at least get nominated, too, her performance here was remarkable as well. Not to sell the rest of the cast short, Forster and Krause add so much. But the heart of the movie really does mainly come from Clooney getting to know his daughter, and his daughter learning to love her Dad.

This is a quiet, unassuming type of movie. It won’t “blow anybody away”. But I think it’s going to resonate emotionally with a LOT of people. I know it did with me. And it’ll stay fresh forever, there isn’t anything here aside from family and the future, and those are pretty timeless. It features phenomenal performances, a fantastic script, a great soundtrack full of Hawaiian music, a gorgeous setting, and top notch direction. It’s totally enjoyable at face value, but if you want to mine it for meaning, it’s there for the taking. A rich, deep ore of it.

This is a movie that says SO much, while “speaking” so little.

And that’s probably why I love it so much.