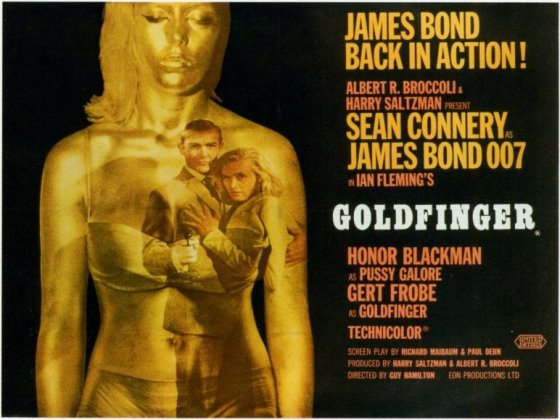 Bond: Do you expect me to talk?

Goldfinger: No, Mr. Bond. I expect you to die

Do I need to say anything more in support of it’s “Classic” status then that?

In 1963, after the resounding box office success of “From Russia With Love”, production quickly began on the next installment of the Bond franchise. The successor was originally intended to be “Thunderball”, but a legal dispute surrounding that film/novel (with the infamous Kevin McClory) forced the producers toward “Goldfinger”. “Goldfinger” was given a budget equal to that of “Dr. No” and “From Russia with Love” combined. For the first time, the series would sport a new director. Terrence Young, who directed the first two installments, bowed out due to salary dispute, and Guy Hamilton (who would return to the series and direct the less than stellar installments “Diamonds are Forever”, “Live and Let Die” and “The Man with the Golden Gun”) was brought on board.

This was the era when the Bond films were still following the novels relatively closely. Although its notable that the scriptwriters made one major change that I’ve always thought was one of the most memorable aspects of the film. In the book, Goldfinger is out to steal the gold. In the film, to get around the physical improbabilities of such an event, they change it to the ingenious “irradiating the gold”. It was a master stroke. I’ve always felt that one of the reasons that “Goldfinger” is so great is due to the fact that Goldfinger’s plot is so clever.

That’s not the only impressive element, of course. There’s the death by gilding, the tricked out Aston Martin DB5, Odd Job flinging his deadly hat, Goldfinger’s intricately designed map room… and of course, the industrial laser which Goldfinger threatens Bond with. The laser was new to the world around the time of the film. In fact, high powered industrial lasers such as the one in the movie didn’t actually exist. So to movie audiences, it was actually a futuristic element.

Returning to the role of Bond was Sean Connery. The films had already made him an international superstar, and he had yet to begin to tire of the role. As a result, I feel that “Godlfinger” is his best Bond ever. He was relaxed and comfortable in the role, practiced at the part, and turning on the Bond charms in full.

For the cast of villains, Honor Blackman, Gert Fröbe, and Harold Sakata were brought in.

Sakata played the thuggish Odd Job. Stocky, nearly silent, imposing… seemingly relishing his evil henchman tasks. He dispatched with his victims by flinging his razor brimmed bowler hat. Sakata was a silver medalist in weight lifting for the US in the 1948 Olympics. His colorful character and unique physique combined to make him one of the best Bond henchmen ever.

Gert Fröbe played Auric Goldfinger, one of the greatest Bond villains the series has ever seen. A german actor, Fröbe spoke little English. As such, his voice in the film was dubbed by actor Michael Collins. A strike I would normally hold against him , especially in light of the fact that Orson Welles was considered for the part (His price was too high). However, the combination works. Impressively. He’s so smug and contentedly evil… Few Bond villains can hope to be compared.

An interesting bit of trivia. Fröbe was actually a Nazi prior to WWII. In fact, this led to the movie being banned in Israel for a brief period in time after its release. Due to the controversy, however, a family of Jews came forward and revealed that Fröbe saved their lives by hiding them from the Gestapo. Fröbe left the party in 1937, prior to the onset of the war.

Continuing the film’s embarrasment of riches is Honor Blackman, who is one of the franchise’s greatest Bond Girls ever. Cast due to her role in “The Avengers”, the creators specifically worked in scenes to showcase her skills in judo. With her unforgettable name and her high profile role in the events, Blackman’s “Pussy Galore” set the bar for Bond Girls for all time. Attractive, intelligent, a threat and an ally alternately, and absolutely integral to the plot of the film.

For the first time in the series, a theme song was prominently used. “Dr. No” had no title theme (though it did introduce the iconic “James Bond Theme”), and “From Russia with Love”‘s theme is played over the end credits… It’s also a song that has little to do with the film aside from using the title in the lyrics.

Goldfinger would change that in an indelible way. From this point forward, the “Theme song” would become an anticipated part of each film. Composed by legendary Bond contributor John Barry (though he didn’t write the lyrics) and sung by Shirley Bassey (who would later also sing the “Diamonds are Forever” and “Moonraker” themes), the song would crack Billboard’s top ten. It remains one of the most famous and highly regarded Bond themes to this day, more than 40 years after its release.