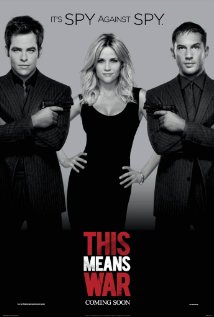 A romantic comedy, directed by McG.

The warning signs were there for me on this one, I was not looking forward to this flick at all, I pretty much had to drag myself in. As way of proof, I offer my tweet from about 7:25 or so est, last night:

But then. A funny thing happened on my way to hating it.

“This Means War” is a romantic comedy with the scales decidedly tipped in favor of the comedy. Certainly there are a handful of romantic moments here and there, but more than anything, they’re gunning for laughs.

With a secondary emphasis on the “Gunning”. See? Chris Pine and Tom Hardy play two CIA agents who fall for the same girl while they’re both benched from active duty. So within that “spying” context, there’s plenty of excuses to intersperse some gun play, some fistfights, and a bunch of gadgets. They’re also being tracked down by an international fugitive, so there’s an action climax to the movie to look forward to… but of course, their biggest obstacle is each other.

Through a series of coincidences (conveniently orchestrated so that Reese doesn’t come off like a two-timing ____), Hardy and Pine both begin seeing her character at the same time. She’s interested in both, as obviously both are very handsome, and they’re both bringing a different appeal to the table. Hardy’s Tuck is the sweet sensitive type. Even though he’s a bruiser of a man, he has a young son, is very soft-spoken, and tends towards the romantic in wooing Reese’s Lauren. Pine, as FDR, is a slick ladies man with the well-practiced moves and lines and the VIP pass to the hot club. I’m not sure what the word is nowadays, but not too long ago it was “Playa”.

It’s not too long before the two discover that they’re both interested in the same girl.

At first, the two make a “gentleman’s agreement” to let her decide, and not get in each other’s way, but that goes by the wayside almost immediately. It’s not long before they’re putting the full resources of the CIA into play spying on each other, sabotaging each other, and trying to find their way into Luaren’s heart. And this is where it got funny. I mean, I found myself laughing at several points, and the theatre was too… These guys obsess over watching each other and go to great lengths to trip the other guy up. And then when they succeed in their sabotage, they take this kind of “HA HA!” glee in %#&$ing the other guy up that… it got to me. These guys have some real fun at the other’s expense, and it translates into being fun to watch.

It isn’t all win, though. Chelsea Handler is alternately funny and annoying to me, it’s really my first exposure to her, so I don’t know how her fans and/or haters will take to it. I found her a little too much. And Reese’s character goes to her for EVERYTHING. Now, I know as an educated movie watcher that that’s because without someone to talk to, they can’t verbalize Lauren’s side of the story. But maybe they should have given her more friends? Turned this one down a notch? The action sequences are pretty lightweight, too. I mean it’s not supposed to be MI:4 or anything, but there were times when the quick cutting was way out of control and even when it wasn’t, the action is very slick and glossy and non threatening to the point of me discounting it.

“This Means War” is a movie that’s sort of reminiscent of a “Mr and Mrs Smith” Lite. It’s funny and fun, but nothing that will stay with you long after the credits roll. The three leads are all charismatic and OBVIOUSLY enjoying themselves. Reese has a lot of fun as a woman with too much good fortune on her hands, and Pine and Hardy bust each other’s balls to great effect.

I found it to be an effervescent piece of confectionary fun.

18 thoughts on “This Means War”