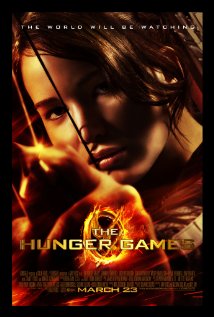 Based on a novel by Suzanne Collins, “The Hunger Games” is the first of a planned trilogy of films revolving around a futuristic society that holds a televised annual celebration featuring children pitted against each other in a fight to the death.

Unfamiliar with the source material, and frankly, a little underwhelmed by the promotional campaigns (at least in proportion with the pre-release hype), I went in to “The Hunger Games” with little to no expectations.

I left highly enthused, though.

“The Hunger Games” is a gripping drama that builds a lavishly detailed setting, unfolds a clear and interesting narrative, gets you highly invested the protagonist, and then lets the games begin.

“The Hunger Games” is the story of young Katniss Everdeen. When her younger sister (still a small child) is selected as “tribute” from their district for the nation’s annual Hunger Games, Katniss volunteers to take her place, instead.

The Hunger Games are an annual competition where one boy and one girl are chosen from each district to fight to the death in a nationally televised event. The Games are held as a reminder that these districts attempted an unsuccessful rebellion nearly a century ago. Ever since, an annual “Reaping” is held where one boy and one girl are sent as “Tributes” – combatants in the mortal carnival. The games are celebrated and glamorized by the nation… a deadly American Idol, where each tribute is introduced, interviewed and idolized prior to being sent out to kill or be killed.

The central city that the games take place in is a futuristic metropolis populated by a priviledged aristocracy, enjoying an opulent daily existence. They’re all garishly costumed and comically chic – a day glo bourgeoisie that sits in stark contrast to the dirt poor residents of Katniss’s district, who hunt for squirrel meat in order to survive. Serving them up entertainment is Seneca Crane (Wes Bentley), the producer of the games, and Caesar Flickerman (Stanley Tucci), the host. The wealthy watchers of the show can choose to “sponsor” the participants and send them useful supplies such as matches and medicines if they’re attached enough to the children to wish to financially invest in them.

It’s here that “The Hunger Games” really grabs you. Not only is the game excellently explained and portrayed (I don’t care how far off this show is in the future, it’s easy to buy into because it’s not hard to imagine), it’s here that the movie’s themes about wealth, power and poverty come out to play. They’re not original, per se… in fact every element of “The Hunger Games” seems to have been explored previously. There were times when literature such as “The Time Machine” and “The Most Dangerous Game” came to mind, and films such as “The Running Man” and “Battle Royale” are going to be obvious comparisons for movie geeks. Yet like a pizza with a unique combination of toppings, I felt as though this was an interesting and novel exploration of the ideas, even though it may not have been in actuality.

There’s a brief period of training and mentoring prior to the contest. By the time the game begins, you will be well invested in the character of Katniss, and you’ll know the whys and hows (at least the pertinent whys and hows) of the world. As such, the events that unfold within the games will have weight and meaning. When kids start killing kids, you will care.

And the kids DO kill kids. Once the games begin, it’s “The Truman Show” meets “Lord of the Flies” as kids scramble for food, supplies and weapons, all while assassinating each other. Meanwhile, above the fray, the producers manipulate the environment, setting fires and sending constructs to guide the events as they see fit. They even change the rules as they go…

I had only a few minor gripes about the movie, the first being the shooting style of the fight scenes… it employs that quick cut jumble garbage where you can’t really tell whats going on. I’d like to personally slap every director that chooses to utilize that in their films. Choreograph a fight scene you lazy bastards! I find it impossible to believe that people actually prefer that style of action, it’s just that they’re not being provided alternatives… The second is that Josh Hutcherson left me a little underwhelmed as Lawrence’s district 12 co-tribute. I realize that there’s probably a love triangle down the road here in this series, and we’re more than likely supposed to be rooting for Liam Hemsworth in said triangle, so I’m sure it serves the purpose of the greater story to have this character be a little bland. He just didn’t seem to have the requisite charisma for me given it’s such a pivotal role in the film… And finally, I really wish that this film didn’t have to be PG13. While they don’t necessarily completely sanitize the violence, I felt at times as if they had really given the violence and the gore of the kills a little more power, it could have substantially reinforced the horrifying nature of the contest. I know they couldn’t, especially given the target audience, but if they had, it really would have helped, in my opinion.

Those things aside, “The Hunger Games” was an excellent, excellent movie. It had me sucked in from the first few minutes, and didn’t let me go until the credits rolled. There were first class performances throughout… Jennifer Lawrence is exceptional as Katniss Everdeen. Woody Harrelson and Elizabeth Banks make an excellent pairing as the district handlers – he’s a boozy, world-weary ex-champ, and she’s an airy socialite who seemingly dances happily to the tune the world is currently playing without ever questioning it. Lenny Kravitz gives a surprising turn as a compassionate trainer, and Donald Sutherland lends gravitas and menace as the nation’s President. But stealing the show may be Stanley Tucci as the host of the hunger games show. Sickeningly polished and enthused for the event, he puts a face on the exploitative evil that the games represent.

But most of all, it’s a highly entertaining movie. It creates a credible fictional world, puts you solidly in the heroines corner, and then unleashes lets the action and endangerment. I do caution people not to go in thinking of this as an action movie, though… its a drama with lots of action.

I hesitate to call “The Hunger Games” a great movie for some reason, but I reserve the right to change that opinion going forward. I will say this. Even with a run time of well over two hours (142 minutes), if I had been introduced to this via a Blu Ray box set and had the other films in the trilogy available at my disposal to watch? There would have been less than a one minute interval before I began the next movie. Press stop on remote, get up, change disc, sit back down, press play on remote. I was that hooked here.

I eagerly await the next one, currently scheduled for November of next year.

105 thoughts on “The Hunger Games”