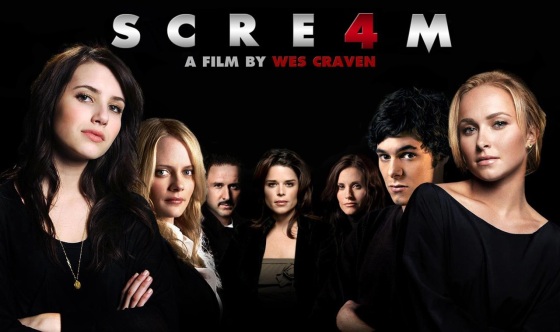 Debuting this weekend on Showtime was “Scream 4”, Kevin Williamson and Wes Craven’s return to Woodsboro. Ten years after “Scream 3”, all the key principals reunite in order to see if they can resuscitate the dormant horror franchise.

The “Scream” franchise has always been known for being a self-aware genre critique. The original’s clever script and rising-star cast turned it into a modern horror classic. The sequel was a worthy one, continuing the “meta” trend by turning the commentary to sequels. The third, however, was an abominable disappointment, drawing scorn from critics and underperforming the previous installments. Essentially, “Scream 3” ended the franchise… til now.

But was Woodsboro worth returning to?

“Scream 4” finds heroine Sidney Prescott (Neve Campbell) returning to her home town as a stop on her book signing tour. Sidney has come to grips with her past and written a book about moving beyond her experiences as a victim. However, the book tour stop coincides with the 15th anniversary of the murders and as if on queue, the murders begin again as soon as she arrives. Returning to town also brings her into contact with series stalwarts Sheriff Dewey (David Arquette) and Gale Weathers (Courtney Cox). Sidney and Gale still have plenty of baggage to work through, but the fact that Ghostface is on the prowl again puts the emphasis on trying to stop the killings.

As we’re reintroduced to the old dramas, we’re also introduced to a new class of Woodsboro high school students, including Sidney’s young cousin, Jill (Emma Roberts). Of course, the majority of them are simply bodies to be thrown on the pyre. As in all “Scream” movies, this generation of Woodsboro High students are obsessed with horror movies, but by this point in time, the movie series within the movie series – “Stab” – has grown to be an entire franchise, so they can focus their horror movie adulation exclusively on it.

That fits right in with the self-obsessed nature of the film. The “Commentary” in this episode briefly touches on the endless nature of sequels, but mainly focuses on social media and people’s endless appetite for documenting and sharing their own experiences. Characters wield mini-cams, live video-blogging the events as they unfold. Other characters, in turn, stream the feed on their phones. The killer is recording things as well. Everyone in this movie is recording. The “Meta” commentary has amplified itself to the point where it’s now commenting on “Meta” commentaries.

Unfortunately, none of it comes together. The “commentary” here feels forced, like it was something inserted out of obligation to the requirements of the series as opposed to anything that anyone actually wanted to say. The kill scenes are fine, with Ghostface being his same old flailing, falling, phone-calling self. As is typical with a “Scream” movie though, the wheels completely come off once Ghostface removes the mask and the killer tries to explain their motivation. This particular reveal is convoluted, non-sensical and arbitrary. I also didn’t care for a good portion of the new cast, particularly Emma Roberts. I found her sadly lacking as the secondary lead. She’s not alone though, I really didn’t connect with any of the new kids.

I’m a big fan of “Scream” and “Scream 2”, so I had hopes for this one. Unfortunately, it let me down.