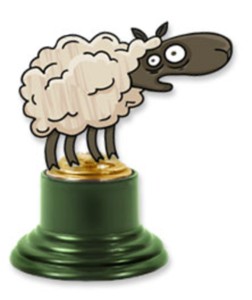 Hey everyone, how’s it going?

The 2012 Lammys kicked off officially last night, and I wanted to make my post today an appeal to my fellow Lammies for their consideration for nominations.

I’m sure everyone knows by now that I’m a huge fan of the LAMB, and that I’ve tried to be very involved since I joined up.

I know that several Lammies frequent FMR, and that others will be stopping by to check it out due to my campaigning. Everyone knows I’m not shy about self-promoting anyways LOL, so I wanted to take some time, break down the categories that I might stand a chance in, and briefly set out some qualifications, shamelessly plug myself, and hopefully earn your nominations!! 😀

It’s a crazy idea, but I’m not big on limiting my potential by shying away from things. FMR is less than a year old, but that doesn’t mean it couldn’t have already reached the top. Just something to consider…

In other forums or elsewhere, I’d probably drop my stats on people… comment counts, page views, yada yada. But not here. Because here people have seen how we’ve “Built a Community”. Yeah, ya have. This is an award I’d really be proud of, because to me, this is what FMR is ALL ABOUT. Seriously.

I dunno, I say some funny shit now and then… so why not?

I’ve run my “Movies That Everyone Should See” columns once a week every week beginning a few months after opening. Since then I’ve written up 42 movies. With each one, I try to remind people why the movie is great. I know that people have enjoyed reading them, now I hope you’ll support them with your nominations!

Been awhile since I went, but I did cover Comic-Con 2011 here for FMR. I brought back video of several panels, including Steven Spielberg and Peter Jackson presenting Tintin. My coverage of the last day was Freshly Pressed! Have a look back through and see if you’d consider it!

FMR is less than a year old, but I’ve already built quite an archives, a healthy commenting community, a thriving podcast. Each week you know you can count on reviews of the biggest releases, a lively discussion thread, and a look back at a classic. I think we rock here, and I’m hoping you agree!

The (title pending) Movie Podcast with Tank and Fogs is also less than a year old. But we’re coming up on 25 episodes, including a brand new one today. You know you can count on us for opinion and entertainment each week! If I had a single episode to hold up, it might be the 80s draft, as that was very well received… but every episode is fun. Tanski and I have a great time together, putting out a weekly show for everyone!

Where else are you getting reviews like this? Who else is unafraid to bust out the A++? You know you love the reviews here, come on now! For all your hyperbole needs, you know where to come each week! LOL.

Well, there you have it. The Lammys are upon us, and I’m not afraid to say that I’d love to add “Award Winning” to the FMR résumé. I know that people enjoy it here, I see the comments, I see the feedback… Now I’m asking for your support. I hope you’ll give some thought to Fogs’ Movie Reviews when it comes time to submit your nominations in any or all of the categories above (Well, Braniac was a joke, let’s be serious).

It’s been a pleasure creating and maintaining this blog, and this is just another fun opportunity that I’ve been given through it. I look forward to making my nominations and showing my support for others, as well! Thanks for taking your time to check this post out, I appreciate it!! 😀 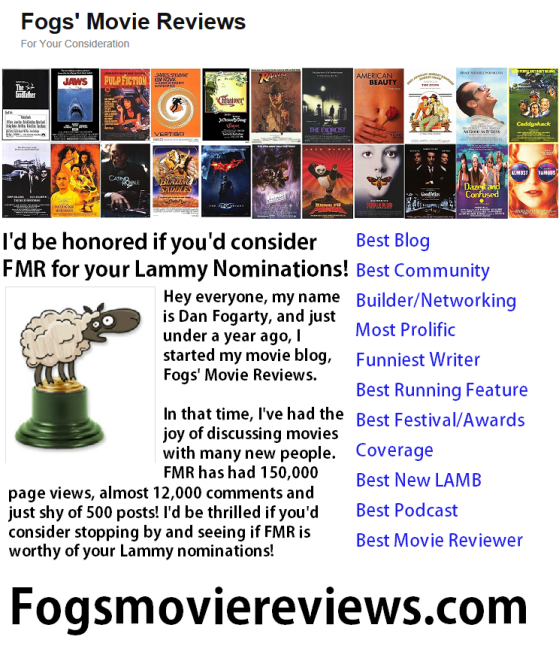 53 thoughts on “I’d be honored if you’d consider FMR for your Lammy Nominations!”