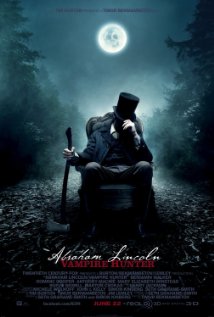 Abraham Lincoln. Killin’ him some vampires.

“Abraham Lincoln: Vampire Hunter” reimagines the 16th President of the United States as an axe-wielding slayer of the undead. He’s driven to vengeance after witnessing a vampire killing his mother while he was a young boy. As he begins his efforts, he has the fortune to fall in with an expert in exterminating the creatures, who trains young Abe in the art. Honest Abe’s weapon of choice is the axe, which he learns to wield with the power of Paul Bunyan and the dexterity of Bruce Lee. He then sets off to assassinate the undead.

The movie intertwines the actual events of Lincoln’s life with his hypothetical fight against Vampires. Thus, when he moved to Springfield to become a shopkeeper and study law, it was actually to slay the undead residing in the city. Vampires shadow his early political ambitions, and of course, the biggest event of Lincoln’s presidency – the Civil War – was actually a war to end the Vampire threat.

The movie is filled with CGI laden slow-mo action sequences, highlighting Lincoln’s axe twirling attack style. He beheads vampires and sends blood spatters arcing across the screen while appropriate “Slo-motion sound effects” play. There are people fighting atop of a speeding train, and Lincoln fighting a vampire amidst a horse stampede. Stylistically the action here feels like a cross between Guy Ritchie’s “Sherlock Holmes” movies and Zack Snyder’s “300”. Unfortunately, even though there are times when Lincoln’s martial arts majorette routine is impressive, more often than not the action scenes are too much style, not enough stakes.

The cast is entertaining enough, nothing here remarkable in any way, but they’re all passable. Benjamin Walker resembles Lincoln sufficiently, Mary Elizabeth Winstead is fetching as Mary Todd Lincoln, and the villains are acceptably evil. Alan Tudyk pops in for a couple of scenes that will make you think… “What is Alan Tudyk doing here?”

No one shines, but I think that that’s the issue with the movie as a whole as well. Aside from the high concept – Abraham Lincoln as an action hero – this flick doesn’t have a lot to offer. It’s neat at times to see how they mix the Vampires in with historical events (Vampires were using slaves as food, for example) but at others it seems a little silly. And the frequent fall back is to the action sequences, which are… uninspired, for the most part, outside of Lincoln’s ax twirling.

It’s a fine enough diversion for a movie on cable, but I can’t recommend a trip to the theatre for it.