Psst! Avast there! It be too late to alter course, mateys. And there be plundering pirates lurkin’ in ev’ry cove, waitin’ to board. Sit closer together and keep your ruddy hands in board. That be the best way to repel boarders. And mark well me words, mateys: Dead men tell no tales! Ye come seekin’ adventure with salty old pirates, eh? Sure you’ve come to the proper place. But keep a weather eye open, mates, and hold on tight. With both hands, if you please. Thar be squalls ahead, and Davy Jones waiting for them what don’t obey. 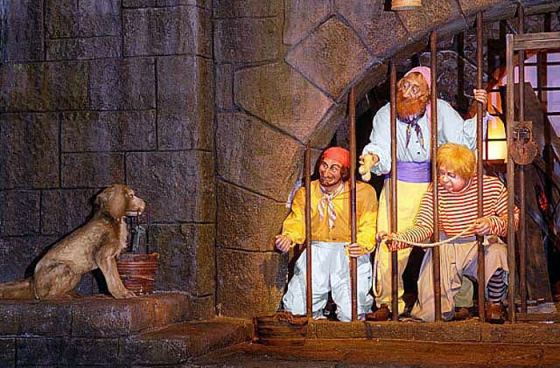 On March 18, 1967, three months after his death, the very last amusement park attraction that Walt Disney himself participated in designing opened at Disneyland.

Pirates of the Caribbean.

The ride is a log flume trip through pirate themed sets and scenes. Visitors ride the water chutes amongst animatronic displays and full-sized recreations which include such sights as a firefly filled bayou, Dead Man’s Grotto (where skeletons sit atop piles of gold), a pirate ship doing battle with a Spanish galleon, and a Caribbean town being looted by Pirates. Along the way, they’re treated to cannon fire, flames, gunshots, glittering treasure, pirate jargon, and of course, “Yo-Ho (A Pirate’s Life for Me)”.

When word was released that Disney intended to make a feature movie based on the ride, the movie going public of the world collectively went, “Huh?” 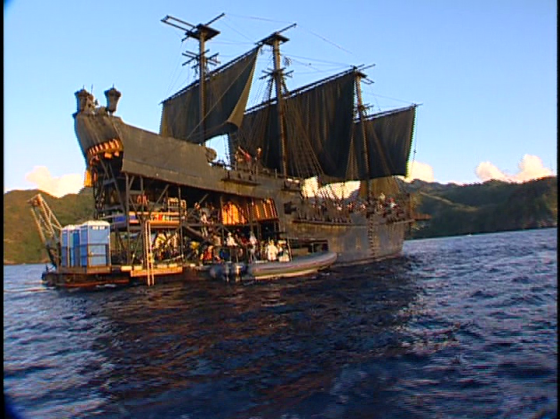 In the conceptualization stages, Disney was unsure whether to create a theatrical release, or a direct-to-video movie. But when the decision was made to “go big”, Dick Cook (then the Chairman of Disney Studios) convinced noted action movie producer Jerry Bruckheimer to take on the project. With credits on his resume for “Top Gun”, “Days of Thunder”, “Bad Boys”, “The Rock”, “Con Air”, “Armageddon”, “Gone in Sixty Seconds”, and “Black Hawk Down”, BIG was what they were going to get.

Before production even began, Bruckheimer requested the script be reworked because he didn’t want to make a “straight up pirate movie”, and thus the supernatural element became incorporated. Gore Verbinski was brought on to direct, coming off the success of “The Ring”. He was interested in resurrecting a genre that had lain fallow since the Golden Age of Cinema… he knew that that would require a lavish, sprawling production. Reportedly Michael Eisner (then Disney CEO) balked at the budget in

pre-production (which was approaching $150 million), and ordered the production halted. Verbinski surreptitiously insisted that the design work continue, however, and was able to use the output to implore Eisner to allow the project to continue. Bruckenheimer cited the fact that contemporary big budget action films were all making that level of investment, and that the film couldn’t be expected to succeed on the cheap. Eisner was swayed by the two of them, and the movie continued to move forward.

Locations were scouted from the Bahamas to South America, looking for unpopulated areas. St Vincent’s was used for the actual port shots of Port Royal. Elaborate sets were constructed, including the fort at Port Royal (at 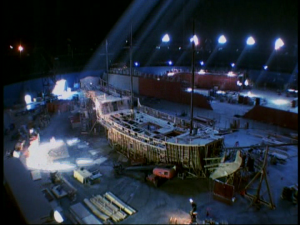 a defunct marine park in Rancho Palos Verdes, California), the Governor’s mansion and the cave that houses the Aztec gold. Three ships were needed for the film. “The Lady Washington”, which is a period reproduction boat, was used for “The Interceptor”, but the “Dauntless” and “The Black Pearl” were built specifically for the film. Three versions of the Pearl were created. Two were seaworthy, but built as partial ships atop of steel barges (with the remainder of the vessels completed by CGI) in order to facilitate shooting. The other was built on a soundstage for shooting the night shots and scenes with heavy fog.

The movie was lining up to be epic in scale. 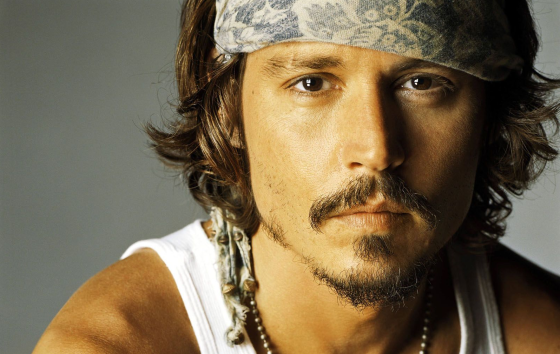 But the biggest news of the production was the casting of Johnny Depp. 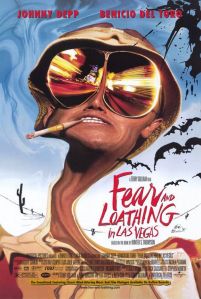 At the time, Johnny Depp was noted for being exceptionally selective with his roles. For example, at that point, he had never done a sequel. His collaborations with Tim Burton at the time consisted only of “Edward Scissorhands”, “Ed Wood” and “Sleepy Hollow”. He had already authored his Hunter S Thompson in “Fear and Loathing in Las Vegas” and worked side by side with Al Pacino in “Donnie Brasco”. In the two years immediately preceding “Pirates”, he was coming off of “From Hell”, “Blow” and “Chocolat”, a fine snapshot of the eclectic mix of high quality projects he was known for choosing. In terms of the classic question as to whether a performer was a “Movie Star” 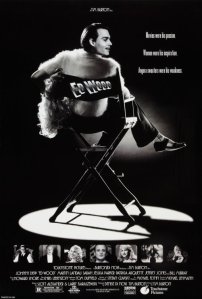 or “An Actor”, at that point in his career, I don’t think anyone would have answered “Movie Star”. Depp was the consummate, selective, talented actor.

The fact that he would do a big budget pirate movie based on a theme park ride almost didn’t add up… except in the sense that if he was going to be varied and unpredictable in the choosing his roles, tent pole action movies would be in the mix.

Little did we know that he would turn in an Academy Award nominated performance and author an unforgettable character. 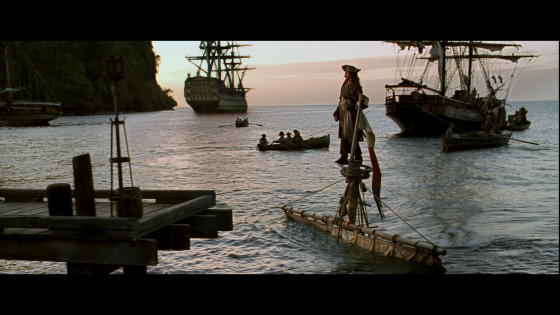 From the first moment we meet him, we know Jack Sparrow will be a legend. A regal score accompanies a close up of the pirate’s face, his leather tricorne sitting atop his coiffe of beaded dreadlocks. He has a focused look on his face, staring off into the distance, standing in the crow’s nest, holding on to the mast. The image we have forming in our heads is completely dispelled when he jumps down, however, revealing that he’s actually in a tiny boat, which is rapidly filling with water.

It’s a hysterical introduction to a character with charm in abundance. Simultaneously blessed and cursed with an over abundance of luck, Captain Jack Sparrow is continuously getting into and out of improbable situations. He’s put in jail, he gets out of jail, he gets marooned on a desert island, he gets rescued from a desert island. They hang him, but he’s rescued. His ships sink, get stolen, and leave without him. His crews mutiny. His compass does not point north. He’s occasionally unintelligible, and constantly accompanies his speech with odd, haltingly constrained, flourishing hand gestures and peculiar body language.

Depp has said that the thought crossed his mind that pirates were the rock stars of their era, so he decided to draw inspiration for his performance by studying his friend Keith Richards. It worked. Sparrow is an indelible, inimitable movie character. Exceptionally entertaining, and the heart and soul of “Pirates of the Caribbean”. 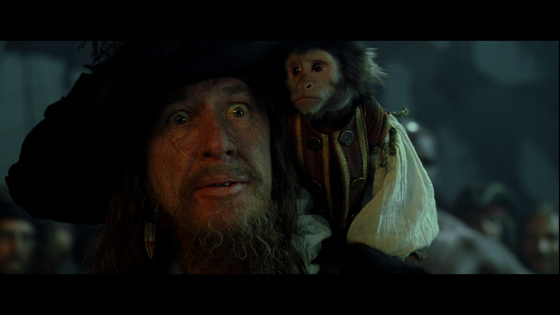 A requisite for great action movies is a great villain, though, and “Pirates of the Caribbean: The Curse of the Black Pearl” has one in Geoffrey Rush’s Captain Barbossa. Rush sneers and scowls, and speaks with an appropriate “pirate” accent. His Barbossa is snide and sarcastic… he’s funny as well as being menacing. He gives the movie exactly what it needs in the villain role. A villain that’s fun to watch.

Barbossa leads Sparrow’s former crew… on Sparrow’s former ship, The Black Pearl. He led a mutiny against Sparrow and left him marooned for dead on a deserted island… just before the crew plundered a treasure chest of cursed Aztec gold. Now he and his men – the crew of The Black Pearl – walk the earth as undead. Shambling skeletons who show their true 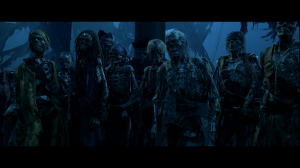 form under the light of the moon. Their mission is to return every piece of gold they took, along with blood of the people who took them, in order to reverse the curse they bear. In order to do that, they come up against Elizabeth Swann (Keira Knightly), who has the last medallion, and Will Turner (Orlando Bloom), the son of the crew member who took it.

And thus the stage is set for an epic tale of chase and confrontation, with numerous excuses to set up conflict and combat. Captain Jack Sparrow wishes to regain his ship, The Black Pearl. Barbossa and his crew have it, and they’re trying to restore the gold and remove the curse. To do that, they abduct Elizabeth Swann, who tries to get free. Also wishing to free her is Bootstrap Bill Turner’s son, Will, who will later become a target of the pirate’s quest as well. They’re all pursued by the British Royal Navy, who want to free Elizabeth and capture or kill any pirates they can.

With all of these cross interests at play, there is no shortage of opportunity to inject action sequences, and “Pirates” does NOT disappoint. There’s swashbuckling sword fights, ships unloading cannons at each other at close range, swinging from the mainsail, and barrages of musket shots. Characters walk the plank, are marooned, and fight atop piles of treasure. It offers everything a fan of pirate movies could possibly hope to see, capped off with a supernatural twist that is skillfully integrated into the narrative. It’s all orchestrated expertly, with the action perfectly paced throughout the film’s runtime, and the humor beats constant and clever throughout. 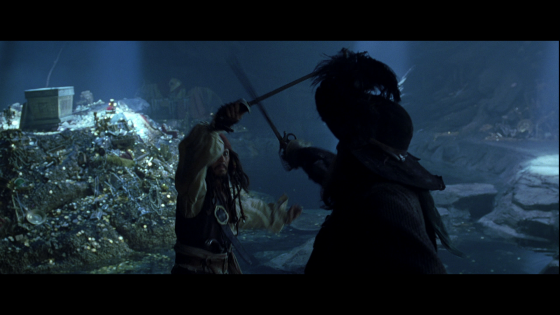 “Pirates of the Caribbean: The Curse of the Black Pearl” was an enormous success upon its release. It shocked the industry… pirate movies had a history of flopping in years previous, and there wasn’t much history for movies based on theme park rides. It went on to gross $654,264,015 worldwide, however, which was good enough to make it the fourth highest grossing film of 2003 (behind “The Lord of the Rings: The Return of the King”, “Finding Nemo” and “The Matrix Reloaded”). It has spawned 3 sequels (to date) and a revamping of the theme park ride that inspired it.

“Pirates” is a wild romp of a movie. Entertaining and exciting. It has humor and action to spare. Depp’s Captain Jack Sparrow is a character for the ages, without a doubt. It’s the epitome of a summer blockbuster – it has impressive special effects, sets, costumes – the money definitely made it up on the screen, here. But it all comes together to provide a thrill ride for the audience that leaves them wanting to see it again.

It’s definitely a “Movie That Everyone Should See“.

41 thoughts on “Movies That Everyone Should See: “Pirates of the Caribbean””