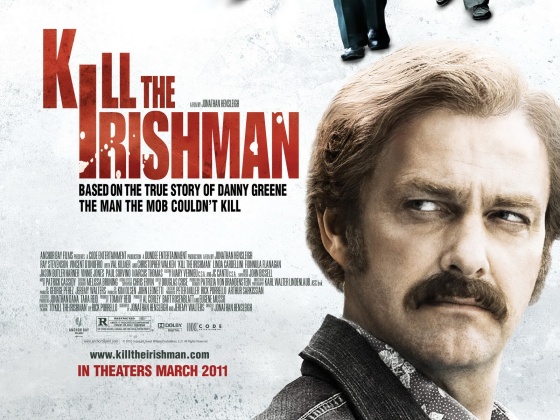 It’s the story of Danny Greene, a mobster who rose to the top of organized crime in Cleveland during the late 1970s. It’s very much a mob movie, with sit downs and shoot outs, and union corruption, etc. Except with an Irish flair, which means more car bombings than I’ve ever seen in a single movie.

Also featuring a virtual who’s who of mob movie character actors, “Kill the Irishman” is a solid, low-budget gangster flick for those who are fans of the genre.

Based on the true story of Danny Greene, “Kill the Irishman” tells the story of an irish dock worker who rises to the leadership of the dockworker’s union through force and intimidation. His power grows with several successive failed assassination attempts. Local mafia leadership tries several times to have him knocked off, yet he manages to survive multiple attempts on his life. Along the way, this impresses a number of people, who begin to follow him and before long Danny has a gang of his own. The mob sees his value, however, and after a turn in the joint related to his first union stewardship, they give him control of the garbage union.

The movie shows the cost of living the life, as well. Greene falls in love with a woman (Linda Cardellini), marries her and has children, but loses her when jail and a turn in his fortune costs him everything they own. He’s also in constant danger. There are so many attempts on his life that it’s a wonder he ever gets any sleep at all. The mob tries to shoot him (more than once), bombs his car, bombs his house… it gets to the point where a bit of an urban legend rises up around the fact that he can’t be killed.

That’s not to say the movie has nothing else to offer… the performances, at times, are very good. Ray Stevenson is intimidating and believably crazy in the lead role, and Linda Cardellini does a lot with her brief screentime and small role as his wife. Plus Christopher Walken is awesome to watch no matter what he does. I swear, the man could make painting a model airplane seem fascinating onscreen. Val Kilmer plays the neighborhood detective who grew up with Greene, and the two have a strange, uneasy friendship with each other. The story itself is interesting, though not all that unique amongst the mobster genre. It’s based on a true story of a crazy (and I do mean recklessly screw loose) Irishman who muscled his way to the top of the Cleveland organized crime scene in the 1970s.

On the whole, this is definitely fan service for mob movie aficionados. But I’m a big fan, so it gets a pass from me.

26 thoughts on “Under the Radar?: “Kill the Irishman””