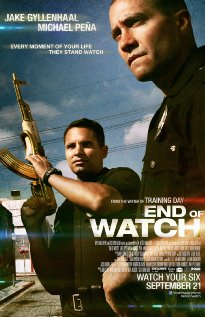 Jake Gyllenhaal and Michael Peña star as two hotshot LA cops who stumble onto cartel activity in their precinct. Undeterred, they charge full steam ahead, challenging the criminals head on.

Along the way, they demonstrate the courage it takes to be a police officer, and the bond that forms between partners.

There’s not much more to this film than that, but it winds up being enough. “End of Watch” is an entertaining cop drama with action to spare.

Brian Taylor (Jake Gyllenhaal) and Mike Zavala (Michael Peña) are patrol partners in Los Angeles. The movie opens with the two engaged in a high speed chase that culminates in a shoot-out with the suspect vehicle. Taylor and Zavala survive, kill the perps, and are cleared by the subsequent inquiry.

After which, they’re emboldened to take more risks on the job. They confront more dangerous suspects, start playing fast and loose with the regulations, and enter hazardous situations without hesitation. Their new, cavalier attitude is rewarded, as well. They log high profile arrests, and receive public commendations for their bravery.

Unfortunately for them, they also draw the attention of the cartel.

“End of Watch” has a lot going for it, primarily the camaraderie between Gyllenhaal and Peña. Not that their performances are remarkable or anything, but the movie’s primary aim does seem to be to illustrate the strength of the bond that’s formed in the squad car between partners, and these two have an excellent rapport. You buy into their friendship. As they bust on each other, as the spend time together getting to know each other’s their significant others (Anna Kendrick and Natalie Martinez), as they face the dangers of the job… You do share the experience of a bond being formed.

There are certainly aspects of the film I didn’t care for, however, starting with the found footage/shaky cam conceit they decided to use. I honestly didn’t understand why they tried to insert the element of the cops filming things at all. If the director wanted to use that style, just use the style… Not that I’m a fan of that technique, but the excuses they made to have cameras present at certain times were patently ridiculous.

The plot got a little sketchy for me, at times, too. These are two cops that never wrote a simple ticket in their lives. Every single thing they did seem reveal a major crime. Whether it was human trafficking, or drug smuggling, or mass murder, or all if the above, simultaneously… I had a mild case of the eye rolls by the end.

Still, Gyllenhaal and Peña win the day. They’re a charismatic pair, and the adrenaline charged situations that they frequently find themselves in are highly watchable, even if it does strain credulity to see them all strung together back to back to back.