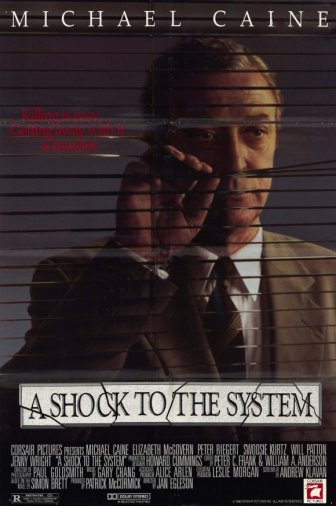 This film is not long, it’s not complicated but it is clever and it features an actor that may well be in a third of the movies I plan on writing about. “A Shock to the System” is a bit like “American Psycho” without the lurid blood and the guessing game over what is real. The stories both take place in the same setting, the New York corporate world. They center around career climbing lead characters and each leads a double life. “A Shock to the System” is the more traditional film but that does not mean it lacks some surprises or a wicked sense of humor.

Caine plays Graham Marshall, a middle aged executive at a large advertising agency on Madison Avenue. His lifeforce has settled into an existence that marginalizes him at home and makes his career goals modest given the times. He and his wife have always counted on his uncanny ability to reach out and get what they want, but Graham feels that his magic is diminishing. When he ends up being passed over for the job that everyone including himself thought was his, a sinister form of the magic he once had takes over and he is determined not to end up disappointed again.

The film is very sharp in observing the interpersonal power dynamics of the executives in the company. As Graham was rising, he was catered to by his colleagues and respected by the office staff. One of the clearest indicators of status in the company is the lighting of a cigar.

Grahams boss, who is being moved out into forced retirement, and held the position that Graham thought would be his, had given Graham a lighter many years earlier, so he knew he would always have someone to give him a light. Just as Graham thinks he is to step into the exulted position, the executives below him confirm that status by performing the same task for him. The lighting of a cigar becomes a ritual like bowing in Japan, one that has nuance and meaning that is unspoken but clearly there. Once the dream comes crashing down, it doesn’t take long for the pack to recognize a new alpha in the form of the younger Robert Benham, played by Peter Riegert.

Having leaped over his former superior, Benham does not take long to consolidate his position by reducing Graham’s stature in very obvious ways. Each slight seems designed to bring Graham to the point of insubordination, which is where he could then be fired. It is as this process begins to build that Caine’s character chooses to try the dark version of his quickly vanishing mojo.

Internalized narration of a lead character is a tricky thing to pull off. In a movie, where it is all about “showing “, narration runs counter to the strength of film art by “telling”. The voice of the lead character in narration is often an indicator of the weakness of a film makers story telling skills. In this case however, the narration is cleverly timed and the phrasing is spoken in such a way as to reveal the self image of the character. We know what his presenting self is, the narration tells us his perceived self and it is fascinating. Graham had seen himself as a sorcerer, able to work magic on others to solve his problems. The loss of the promotion becomes the catalyst to redefine the characters in his life and to

begin to cast new spells. We hear him decide that his wife is a witch, who has dampened his ability. The calculated way he proceeds is chilling but also humorous. At each moment he has chosen to execute one of his devious plans, he waves his fingers as if he where a magician, making a spell fly out of the ends of his digits to perform his will.

Of course it isn’t magic, it is murder. The plans he hatches are relatively simple but like a Columbo mystery, he carefully sets up an alibi to cover his culpability. The giggle he lets out when he makes a pun over one of the deaths reveals his new cold blooded nature. As wrong as it might be, the audience is likely to identify with him and enjoy his success and worry about his mistakes along the way. Caine has a great time demonstrating his power to contain his true nature but he does let the mask slip occasionally and we are treated to a couple of those great rants that Caine is capable of delivering with gusto. His bitterness and righteous indignation get released on a coworker and his new boss and they are scenes that will make us all remember how tart the human voice can be.

Graham sees himself as a sorcerer and he takes an apprentice in the form of lovely and smart underling Stella Anderson. Elizabeth McGovern plays Stella as a confident working professional who suddenly begins to see who her boss and new lover really is. The detective investigating the deaths of those close to Graham seeks to turn her against him and the last act entails the consequences.

The main weakness of the film is the trail that feckless police Lt. Laker follows to try and pin the deaths on Graham. The absence of dust on a piece of electrical tape is enough to raise the hair on the back of his neck. Will Patton is not responsible for the script he is following, but he looks lost despite his supposed cleverness. The key piece of evidence that might implicate Graham comes up in the Lt.’s radar for no discernible reason. It is never clear why a car rental by another character would ever be looked at by the police. To be fair, this movie is a social satire not a police procedural, but that one element does detract from the otherwise excellent script by Andrew Klaven from the book by Simon Brett. I have not read the novel but it apparently ends quite differently than the film so Mr. Klaven deserves credit for the biting sting of the last couple of moments in the movie.

Everyone does a fine job in this film but the movie probably feels a little small because it is limited in violent incidents and builds so slowly. Riegert plays the kind of insolent know-it-all his character in “Animal House” might have grown up to be if he were ambitious. McGovern ends up sad after starting off so sexy and confident. Stella turns into another victim of Grahams magic and the effect is disturbing. As I watched the credits, I saw the name of Samuel L. Jackson but I did not notice him

in the film. When I scrolled back, he had about two seconds of screen time as a three card Monte hustler on the N.Y. City sidewalks. This had to be one of his earliest roles in films. It turns out this is one of seven films the prolific Mr. Jackson appeared in during the year 1990. Ultimately, no one else is going to be remembered for this film except Michael Caine. He has often played bad men but this time he seems to relish the role so much more. If you are a fan, and have not seen this, it is not just a movie I want you to see, it is a Movie You Have to See.