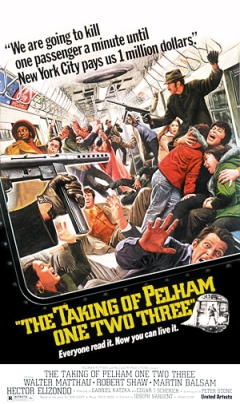 I recently spent the weekend with some friends and a guy I know well, and have been friends with for more than thirty five years, had the audacity to suggest that the remake of this film was more entertaining than the original. I instantly dropped my jaw, exclaimed loudly that he had to be kidding and then proceeded to disagree in a condescending manner. I have to apologize for the tone, it was not called for and I would not want my friend to be angry at me because I mocked his preference for the 2009 version. I do want him to know and understand that although I liked the Denzel/Travolta film, it can’t really hold a candle to the original and that vigorous defense of the 1974 classic  begins now as I once more recommend a movie that I want everyone to see.

The nineteen seventies were the last golden age of movie making. There have been plenty of great movies since then, and there have even been periods of time when a film making movement has taken center stage. Yet pound for pound the period of time when the studios were still controlled by film makers and not corporate conglomerates, remains the longest sustained period of film making excellence since the 30s. The mavericks that ran the studios lead by the seat of their pants, and their taste in films. When they succeeded, like Robert Evans did at Paramount, the atmosphere was invigorating. After “Heaven’s Gate” and the fall of United Artists, the movie business changed. Not always in negative ways but it was very different. “The Taking of Pelham 123” is one of those films that represent a gritty view of the world, with cynicism that reflected the time and place and was not simply a joke or a stylistic flourish. It’s not the kind of film that would have appealed to a modern studio as much. Maybe the indie world would be able to put something like this on the screen these days but it would not have had the cache of this version. The remake exists because there is already a story, and a success that the marketers can shoehorn into their philosophy. The remake is a casting gimmick, it worked but only because the groundwork had been laid out by the original. 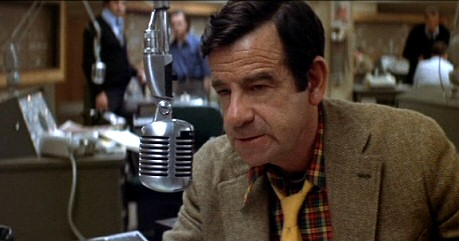 This is a crime film where the crime involves holding hostages for ransom. The conceit is that the location of the kidnapping is a moving target underground. The set up of the movie familiarizes us with a variety of characters, most of whom are working stiffs in the NY Transit System. Walter Matthau, who made his daily bread playing cynical types, is the worn down head of the transit police in charge of one section of the subway system. Lt. Garber, mouths off at his co-workers, dutifully provides a tour to visiting transit dignitaries and generally growls his way through another work day. The re-make casts Denzel as as a dispatcher rather than a cop. OK that might work, except it the remake then  gives him a back story and a plot line that have nothing to do with the main event. The goal is to layer the character and make the plot deeper. In my view it comes off as uncertainty as to how to make the plot as tense as possible. They resort to tricks to build empathy for Garber.  Matthau’s cop version is just doing his job. He is good at it and he struggles with the crisis he is faced with but our rooting interest is in the events not the man. Denzel is given multiple crisis to deal with and his willingness to do the job is undermined by the suspicion around him because of a separate story that is not really the focus of the film.

As a great illustration of the urban grittiness found in the original, take a listen to this terrific main theme that muscles the story onto the screen and tells you this is a film about tough men and dangerous situations, and manages to do so without resorting to theatrics.

I don’t remember the score from the remake, but I do remember the over the top “bad guy” played by John Travolta. Dark glasses, close cropped hair, Fu Manchu mustache and tattoos galore are all trademarks of movie bad guys in the last twenty years. All the gang in the original had fake mustaches but they wore them as a cover not as an attempt to intimidate. Even though there is not any back story or character costuming, the four hijackers in the 1974 film all had distinct personalities and they were easy to remember by their colorful sobriquets.  I am pretty sure this is where Tarantino cribbed the idea for naming his characters in “Reservoir Dogs”.

The ultimate measure of any story like this is the villain, and while Travolta was scary and played the part as was written, his character is not as interesting or unnerving as Robert Shaw’s Mr. Blue. While we ultimately h

ear a little bit more about his background, the truth is none of it matters because we know from the beginning that he is a ruthless professional. The look in his eye and the demeanor he conveys is all we need to know he is an alpha. Shaw never screams or shouts. Mr. Blue’s cool voice and nearly expressionless face tells every passenger on that train that he is not a man to be f***ed with. The next year after this, Shaw did “Jaws” which was a performance that draws attention to the characters idiosyncrasies.  Except for his intolerance of the psycho Mr. Grey, we see little of his motivation or internal processes. Shaw underplays every scene and the dialogue with Matthau on the radio is deadly earnest. He never compromises. The one time his timetable is adjusted has nothing to do with negotiating but everything to do with the situation, he still is in charge.

The way the hijackers maintain their control of the situation is by following Mr. Blue’s lead. He guns down a hostage in cold blood and he doesn’t accept the improvisation of his reckless ex mafia colleague. When he speaks to the passengers there is no mock sympathy or reassurance. He simply speaks directly and he acts as he has promised to.

The supporting players are a combination of believable types and loathsome stereotypes. Most of the employees of the N.Y. Transit system come off as they are supposed to, harried professionals who view these events from the point of view of a bureaucrat rather than an average citizen. Ben Stiller’s Dad shows up, not cracking wise so much as he is humorously supporting Garber as his partner in the Transit police. Veteran TV character actor Dick O’Neil plays the intolerant train schedule manager who can’t be bothered to worry about dead customers when the trains are getting off schedule. He asks at one point what the customers want for their  lousy 35 cents, to live forever? This is the kind of casual negativity that pushes Garber into one of his few outward displays of frustration.  We get a chance to see the craven actions of political figures as they calculate the costs of paying a ransom. A calculation that has more to do with the next election than saving the lives of the hostages.  We never get to know much about the captives, they are stereotypes; old man, panicked mother, hooker etc. This is not a story of the lives of the victims of this crime or the perpetrators or the cops. The story focuses on the events of the crime.

The New York subway system seems familiar because we’ve seen it in a hundred movies. Overcrowded, not quite clean, sometimes antiquated and claustrophobic.   The film manages to convey all of that without dwelling on any of it. The darkness surrounding the train car becomes the background for some good tense scenes. One cop even jokes that because of his color he wants everyone to be aware that he is between the SWAT team and the criminals. There is a very morbid sense that everyone in those tunnels is just another rat in a hole and they all have to fend for themselves. While there are nihilistic films out there today, it is hard to see a major studio building a film around that sort of attitude. The characters would have to be sympathetic and the bureaucracy would be the focus of anger rather than the kidnappers. 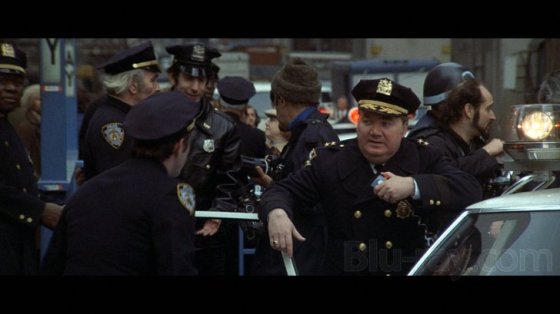 The cops at the surface have many of the same attitudes that we might see fifteen years later in “Die Hard”.  They are ready to shoot first and ask questions later. They are not always competent, witness the car crash that delays delivery of the money, but they don’t play most of this for laughs. The police in authority are not figures to be mocked like Dwayne Robinson, they are also working professionals that are worn from the job but shrug their shoulders and do it anyway. This whole film is very much a blue collar thriller. The bad guys are a team of desperate men not an army of tactically trained experts. The Transit employees are real people in a tough thankless job that have become jaded. The cops are overwhelmed and smart but not brilliant. The only pure comic personae is the Mayor with the flu.

The remake is filled with visual twists and plot developments to astound us. This movie is not filled with fireworks but it manages to hold our attention and be entertaining. The plot scenario might sound farfetched but set in the days of D.B. Cooper and hijacking of planes to Cuba it feels real. The city, the subway the  passengers, the crooks and the cops all come across as real people. This is not a spy adventure or an action film with a hero who overcomes incredible odds. It is an urban thriller that makes it’s story feel like it could happen and characters that might really exist. The final clue that nails the hijacker that gets away is even more fun now a days when we see so many stories about stupid criminals. Even though the denouncement is played for a laugh, it also feels authentic. 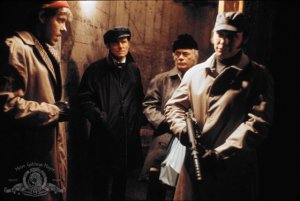 I’m sure most of the readers of this site have probably watched this film a time or two. Fogs gave me a term in a on-line post that I now use regularly. This is a “Black Hole” film. It’s gravitational pull for me is overwhelming, and every time I encounter it I lose another 104 minutes of my life but I gain a 104 minutes of time with story tellers who know what the hell they were doing.