Crazy crazy four days. Or should I say three crazy days, plus Sunday?

Sunday is the day where there’s nothing to rush to. You’ve already seen the floor, so you know your way around well, you know what’s out there, you’re not scrambling around anymore trying to “See Everything”. You have no reason to be hustling or hurrying, and neither to do the other attendees. This creates – as much as something like this can exist by Comic-con standards – a relaxed atmosphere. You walk around, you see the sights, you try to bag an autograph or two, and just soak it all in the best you can, knowing that there’s only a few hours left to the convention.

I tried to do just that

END_OF_DOCUMENT_TOKEN_TO_BE_REPLACED

This is why people camp out overnight.

Hall H today is why television networks cover the convention.

Why people travel from all over the world. Guam. Brazil. Canada. England. Heard them all this week. All over.

This is why Comic-Con is worth the big bucks, the headaches, the sleep deprivation, the hunger pains, the bursting bladder, the sore back, the blisters on your feet.

Because you just do NOT GET stuff like this anywhere else.

END_OF_DOCUMENT_TOKEN_TO_BE_REPLACED

And I have never been further back in line for an event. I cannot even SEE Hall H right now. The Lawn is completely full of campers, the sidewalk across the street was full of campers, the line loops around the grass and back by the bay. I got up at 4 am, and now wonder if I’ll even get in.

I spent my time last night updating all the photos, and never got around to a summary post, so I figured since I have TIME (LOL), I might as well write up my adventures from yesterday. Read on!

END_OF_DOCUMENT_TOKEN_TO_BE_REPLACED

Ok. Those of you who follow me on twitter have seen me post pics (to the best of my ability) throughout the day, and I’ve had a couple of opportunities to do a sampling of the costumes I’ve been capturing here and there on the blog.

Here’s a gallery of (almost) all of the costumes I’ve been able to snap a pic of so far this year at Comic-Con. A few just didnt come out, or had other people in them… aside from that though, here’s a bombing gallery of all the Cosplay I’ve captured so far this year.

END_OF_DOCUMENT_TOKEN_TO_BE_REPLACED

This morning, one of the first things I did when I hit the Floor was to check out the display that had been set up to promote Tim Burton’s upcoming stop-motion animated film, “Frankenweenie”.

After seeing the presentation in Hall H on Thursday, my estimation for the movie’s prospects rose dramatically and so I wanted to be sure to stop in and see the display, in case the movie turns out really awesome, I didn’t want to regret not checking it out.

Being first thing in the morning, there was no line and I was able to get right in. During the day, they only let a limited number of people in at a time in order to give everyone plenty of space to take pictures and look at the displays at their leisure.

The exhibit contains the actual figures that were used during the animation process, along with a number of the miniature sets. There were multiple figures for each character made, because scenes had to be worked on concurrently by multiple teams in order to complete the movie in a timely fashion. It can take days to get mere seconds of film time accomplished, so its important to have the coordinated effort to get everything done on time.

The display was obviously put together with enormous care, and staffed by attendees who were knowledgeable about the film, and encouraging to the visitors… click through to see the photos I took of the exhibit!

END_OF_DOCUMENT_TOKEN_TO_BE_REPLACED

Sorry for the lack of updates on the blog, I’ve been battling with this crappy Comic-Con WiFi everytime I get a chance to sit…

It’s been a great day on the floor so far though, click through to see a bunch of random pics from the halfway point, I’ll do a full debrief tonight!!

END_OF_DOCUMENT_TOKEN_TO_BE_REPLACED

Hello from the hotel… Thursday, day one of Comic-Con, is behind me. But what a memorable day it wound up being.

After getting worn down by the floor in the morning, I decided to check in to the Hall H line earlier than expected, and do a little blogging from the Hall H grass as I waited. Never happened. Unexpectedly, the line rolled right in to the auditorium, and I wound up getting in within 30 minutes or so. Practically no wait at all by Hall H standards.

The good news was, I was there in plenty of time for the Disney panel. The bad news was, for the second time in my three year Con career, I had to sit through a “Twilight” panel. LOL

But it wound up being an amazing day in the Hall. For having little plans or expectations on the day, I wound up seeing directors Tim Burton and Sam Raimi, Mila Kunis, Michelle Williams and John C Reilly… and then Jackie Chan served as a warm up act for the best panel I’ve ever seen… “The Expendables 2”, which notably featured Sylvester Stallone and Arnold Schwarzenegger sharing the same stage!

Click through to read about it, and see the pics of this amazing day in the Hall.

END_OF_DOCUMENT_TOKEN_TO_BE_REPLACED

Hoping the wifi holds out so I can get this post up, we’ll see. Hall H does seem to be a black hole from which electronic signals do not escape…

Thursday morning floor pics to follow, click through to check them out! Not a lot of time to write them up right now, will summarize the day later tonight…

For now, click through to check out some pics to give you a taste of my Thursday Morning at Comic-Con!!

END_OF_DOCUMENT_TOKEN_TO_BE_REPLACED

One major highlight for me already this morning was getting to see an exhibit featuring six different Batmobiles. I wasnt able to get around front of the Clooney one (Comic-Con security logic LOL), but stuff like this is why Comic-Con is so worth it.

When else would you get this opportunity?

It was very early (8am), uncrowded, and quiet. Almost like “The Batmobile Memorial”. I spent an unhurried forty five minutes there before finally heading to the Convention center…

The line is about to move, they’re heading in. But here’s my first proper “share” of Comic-Con 2012 for you… The Batmobile Exhibit! 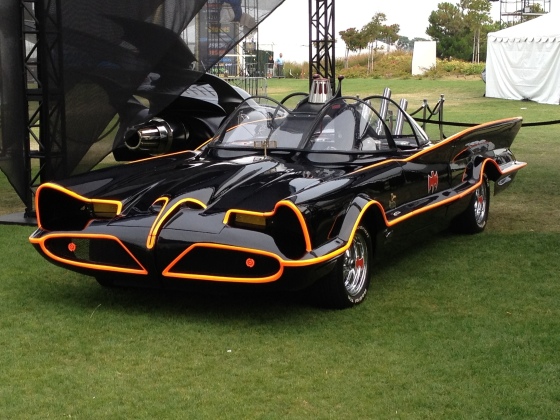 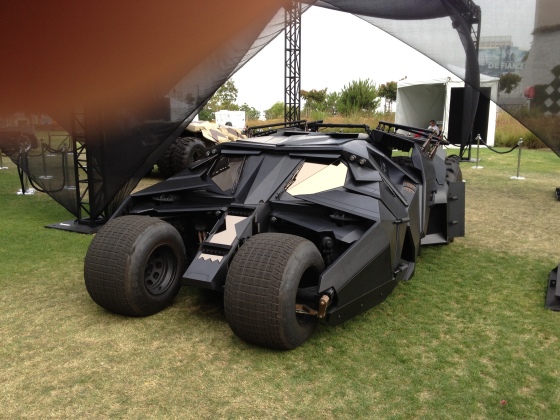 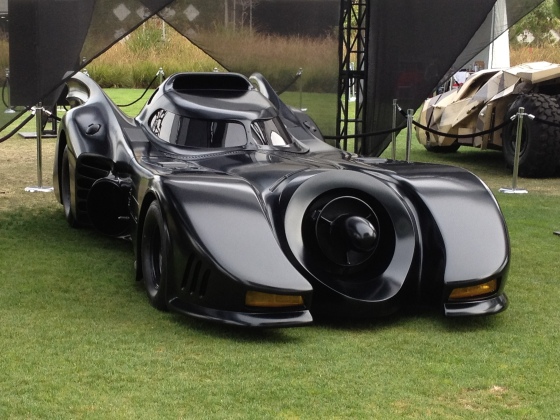