END_OF_DOCUMENT_TOKEN_TO_BE_REPLACED

Hollywood in the Golden Age, Nazi Commandos, Gangsters, Young Love, Air Speed Races, Howard Hughes, is there anything that is not found in this Walt Disney Picture from more than twenty years ago? I can’t think of anything they could have added to make this movie better. The story is a clever adventure which mixes real world events with science fiction elements and puts it in the backdrop of one of the most romantic times and places in film history. “The Rocketeer” was a modest success and not a break out hit that would justify a sequel. The movie harkens back to the serial adventures of the 1940s but is based on a racy 1982 graphic novel/comic, which has enjoyed greater literary success than it’s cinematic cousin. There are some obvious changes made in adapting this to the big screen. The biggest change was altering the character of Jenny Blake. Instead of the somewhat seedy “party girl/stripper” she is in the comic, she becomes a more wholesome ingenue. She is an innocent young actress, trying to break into the movies by playing in the crowd scenes in the movies being manufactured at the Hollywood Dream Factories of the Golden Age. 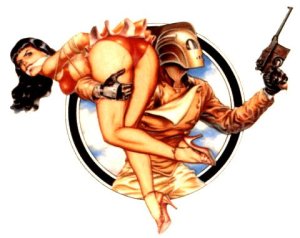