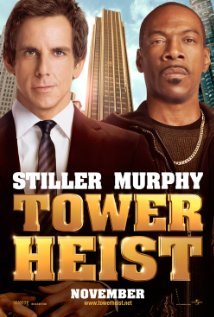 Tower Heist (as I’m sure you all know by now) is the story of a group of hotel employees who, after being defrauded by one of their hotel’s residents, decide to even the score by breaking into his apartment and robbing him. It features Ben Stiller, Eddie Murphy, Matthew Broderick, Casey Affleck, Michael Peña and others in a sort of “Robin Hood and his Merry Men” for the Bernie Madoff era.

I just wish it had been funnier.

END_OF_DOCUMENT_TOKEN_TO_BE_REPLACED

God. I’ve GOT to stop doing that! Why anybody comes back to this blog when I keep doling out such HAM is beyond me.

It’s true though. The movies of summer have gone. This weekend brings “Don’t be Afraid of the Dark”, “Our Idiot Brother” and “Colombiana”, after which the summer season will be officially deemed closed.

BIG movies begin to come back during the “Holiday Movie Season”, which begins the week before Thanksgiving. This year the Holiday season will kick off with “Happy Feet Two”, “Twilight: Breaking Dawn” and (thankfully) “Tinker Tailor Soldier Spy” starring Gary Oldman. Once those movies hit, the ball is officially rolling, as Turkey Day weekend itself brings us “The Muppets” and Martin Scorsese’s “Hugo”.

The fall is pretty much the lowest profile time of the year for movies. Blockbusters come out in the Summer, the Holidays, and early March. Oscar contenders are typically released in January to stay fresh in voters minds. With the exception of Halloween, which often brings high-profile horror movies, the fall pretty much has a reputation for being a dumping ground.