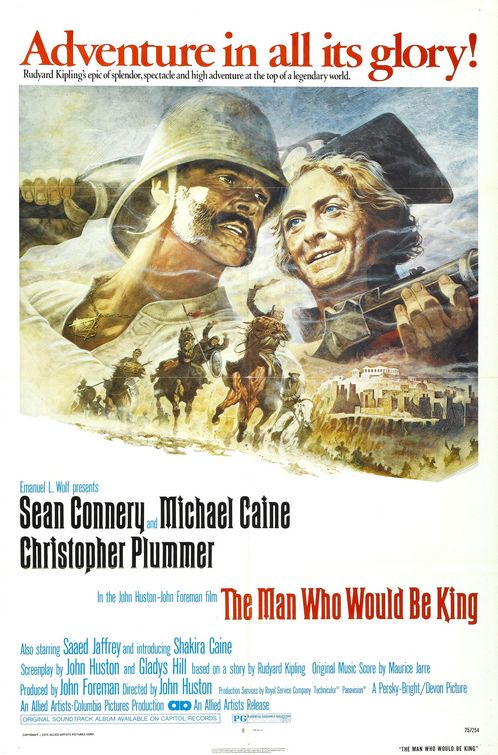 All you film fans out there who were born after 1970 are about to eat your hearts out. You may know that the 70s were the second golden age of Hollywood, after all that’s when “Star Wars”, “The Godfather”, and “Alien” all started. You may even be aware that the greatest adventure film ever made, “Jaws”, was released in the Summer of 1975. It would be a solid argument to make that 1975 was the apex of Hollywood film making in that decade. Here is a partial list of the movies released that year: “One Flew Over the Cuckoo’s Nest, Dog Day Afternoon, Barry Lyndon, Monty Python and the Holy Grail, Rollerball, Three Days of the Condor, Shampoo, Nashville, Seven Beauties, Cousin cousine,The Passenger as well as the aforementioned fish story. ” That is a list of essential films for anyone who loves movies to partake of. Buried in the avalanche of great films from that year, is the one film that stars Michael Caine and Sean Connery together as the leading men (each had a small part in “A Bridge Too Far”) and as a bonus it was directed by John Huston.

“The Man Who Would be King” was a dream project for John Huston. He had tried to put together a version of the movie as far back as the 1950. His original choices for leads were Clark Gable and Humphrey Bogart. That was the royalty of the earlier film generation. When he finally did get to put the story in front of the cameras it was to feature the royalty of the next generation of movie stars. While other names had been mentioned, someone (likely Paul Newman who turned down the film) suggested that Huston stick to using British actors. That was the best advise Huston could get because this movie is a quintessentially British story focused on a time period when the English Empire was at it’s height and the ambitions of men who were it’s subjects knew no bounds. It is this condition that allows our lead characters to work so well in the tale.

Peachy Carnahan and Daniel Dravot are recently retired British non commissioned soldiers who decide the world at home is not big enough for the likes of them. They have developed a strategy to make themselves Kings. In particular, rulers of Kafiristan, a remote region of Afghanistan.

Daniel Dravot:” In any place where they fight, a man who knows how to drill men can always be a King. We shall go to those parts and say to any King we find – “D’you want to vanquish your foes?’ and we will show him how to drill men; for that we know better than anything else. Then we will subvert that King and seize his Throne and establish a Dynasty.”

Before they begin this quest, they make the acquaintance of an English journalist working in India as well. This journalist turns out to be Rudyard Kipling, who wrote the story on which the film is based. These encounters with Kipling becomes the bookends for the film and give the story an even greater sense of adventure and  mystery. While the story itself is fantastic, the characters are ground in reality and the presence of Kipling as future narrator of the tale is all the more needed to set the mood. If you have not seen this film, be assured that when you get to the end you will empathize with the Kipling character and stare in wonder at the proof of it all. The tie in to the story concerns the masonic brotherhood that the English characters share in common. There are some great curves that follow from this early revelation. Christopher Plummer is unrecognizable in the role and he strikes just the right tone of concerned bemusement in the first act and utter astonishment in the conclusion.

After assisting the two adventurers, Kipling fades from the story and the focus is on the travel to Kafiristan. There are several exciting incidents on the road but eventually the spine of the story begins when they arrive and connect with the remnants of an earlier English expedition. The lone survivor is a gurkha soldier named Billy Fish. He becomes their interpreter and confidant. His part in the story reminds us that the relationship of the British to their Empire was not always hostile. These fierce hill people fought valiantly alongside their English counterparts in many battles over the last two hundred years. While the relationship is not one of equality, the two adventurers are not condescending to their third partner, in fact they trust him implicitly.

The second act of the film focuses on the battles and strategy that the two employ to gain the power that brought them to the remote land to begin with. There are several small incidents that test their friendship and commitment. There is a great deal of humor involved in the training sequences and in some of the moments of conquest. That humor may be viewed as politically incorrect at times, but it is not so much based on racism as ethnocentricity. The world is still a brutal place, and while those of us living in Western cultures might view some of the behaviors as relics of the past, it may not be as true as we wish. Of course the intercultural conflicts go both directions since the English soldiers are viewed just as differently by the tribesmen they encounter as we might treat a alien from another world.

All of this is offered up though through the performances of two of the greatest screen personae of the last fifty years of film. Connery and Caine are both Award winning performers from the generation of actors that came out of England in the sixties. Along with Albert Finney, Peter O’Toole and Richard Harris, they represent that moment in time when the culture of Great Britain was the Beatles and James Bond. Here they are in an adventure story that harkens back to the glory days of the Empire and much as the Western is a romanticism of American history, a film like this served the same purpose for the English. Connery plays Daniel Dravot as the more blustery of the two itinerant soldiers. He uses his commanding voice and fierce expression to cow his enemies and establish a position of power with others. He can however take on a warm quality as he does with Kipling at one point and his subjects later on in the film. The dividing point for the two characters comes when Danny becomes infatuated with a local beauty that he sees as cementing the legacy of Alexander he has come to see himself playing.  The beautiful Mrs. Caine was cast in the part at the last minute as soon as John Huston met her.

Peachy Carnehan has the more subdued character. Caine is more sly and cautious, except for the scene on the train in the opening of the film. Peachy does get his dander up but almost always it is in response to his partner and not the other characters. It is Michael Caine’s  delivery of the opening framing story that gives the tale it’s magical quality.

Peachy Carnehan: “The same – and not the same, who sat besides you in the first class carriage, on the train to Marwar Junction, three summers and a thousand years ago.”

It is that prologue that sucks us in and makes us want to know what has transpired in the intervening three years. Caine has a breathless line reading that is haunting and fits really well with the coda of the story. It is his willingness to hold back his voice at times that allows the ruse these two perpetuate on the populace to work. He is the brains of the outfit but he has to stand back to let his partner gain the power that both of them seek. You can also see it in his face and posture when Danny gets full of himself and Peachy has to let some of the air out of him. 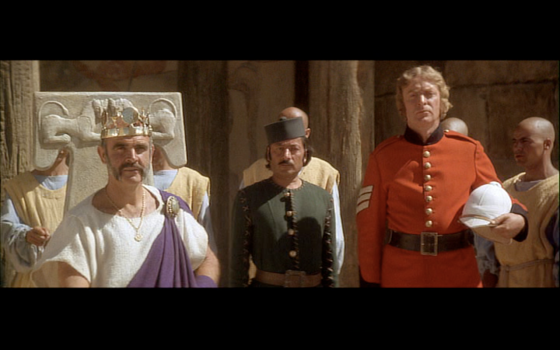 Connery has said that this is his favorite film that he appeared in. I heard him say it in person at the Archlight Cinerama Dome Theater in Hollywood three years ago. He did a short five to ten minute introduction of the film at one of the AFI Night at the Movies events. It is easy to see why he would feel this way. He and Michael Caine get to play larger than life characters who are a little bit crazed. There is action, drama, comedy and suspense throughout the story.  While there are a number of other elements of the film that make it memorable and worthy, all of them would be for naught if the two actors at the heart of the story were not perfect.

The film was nominated for four Academy Awards: art direction, costume design,editing and screenplay. Amazingly it did not win any of those categories. Even more amazing is that the two leads and the fine supporting performance from Plummer were not recognized at all. It is ideal to imagine that this was a result of the lushness of the films of the period. It was clearly not the inadequacy of the work done by the film makers. The score is by Maurice Jarre, the man responsible for the music of “Lawrence of Arabia” and “Dr. Zhivago”. So you can expect the music to reflect the grandeur of the setting and the heroics and faults of the two main characters. If you listen to the opening track that accompanies the titles, you will hear echos of “Gunga Din” and those 1960s classics as well.

As the story unfolds and you witness the relationship between Danny and Peachy, you will see why Huston thought of Bogart and Gable and later Redford and Newman. There is great byplay with the two actors. At one point they had hoped to share the screen again, this time with their pal Roger Moore, in a version of James Clavell’s Tai Pan.  It is something to lament that this coupling of actors could not be accommodated later on. That makes it all the more important to treasure this match up of two great actors the likes of which we may never see again.