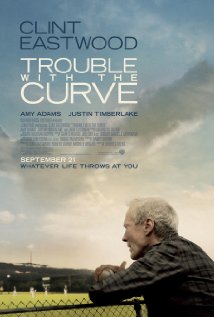 Clint Eastwood and Amy Adams star in a picture about an aging father who’s having difficulties with his job, and has never connected well with his daughter. Together they try to work out their issues, scout a highly touted baseball prospect, and navigate her issues with work and romance.

It’s a lot of ground to cover, and the movie isn’t able to avoid the temptation to utilize simple solutions and pat resolutions. But the considerable charms of the cast make “Trouble With the Curve” a mildly enjoyable, if ultimately forgettable experience.

Gus Lobel (Clint Eastwood) has been a scout for the Atlanta Braves for decades. Now, a hotshot young member of the scouting department (Matthew Lillard) utilizing the latest computer technology is threatening Gus’ way of doing things.  The head of the scouting department, Pete (John Goodman), is concerned… the hotshot young scout has the GM’s (Robert Patrick) ear. Gus has also been losing his eyesight, and is beginning to demonstrate difficulties with common things like driving. So Pete speaks to Gus’ daughter, Mickey (Amy Adams) and asks her to accompany Gus on a scouting trip to the Carolinas. The Braves have a high pick in the first round, there’s a coveted prospect to be looked at, and Gus’ contract is up for renewal in a few short months. The stakes are high.

She and her father have had a strained relationship since her mother died (when Mickey was a young girl). Mickey is also up for a partnership at her law firm, and the timing here is terrible for her professionally. She needs to juggle her work responsibilities while trying to assist her father. Her work has been first and foremost in her life, which hasn’t left her much time for romantic relationships, either. Enter Johnny (Justin Timberlake), a former pitching prospect that Gus scouted who threw out his arm and is now working as a scout himself. When he crosses paths with Mickey, a romance begins to blossom.

All is not conflict free, however. Aside from Mickey’s difficulties in handling her professional responsibilities, and trying to sort out her issues with her crotchety father, and the developing romance between her and Johnny, Gus and Johnny are scouting the same player for rival teams, and Gus is forming an opinion on the prospect contrary to what his scouting department wants to hear.

“Trouble With the Curve” is a drama that’s not overly dramatic, a romance that isn’t overly romantic, and a baseball movie that doesn’t have a lot of baseball. By trying to juggling too many elements at once, the script weakens itself to the point where none of the storylines are that well-developed. There’s a reliance on simple set ups and simple solutions. The end of the movie can be seen coming from miles away, even with the Deus Ex Machina they interject at the last moment. The actors in this film can each perform their roles in their sleep. Clint plays a cranky old man, Amy Adams needs to be adorable as the girl who knows too much about baseball to be real, and Justin Timberlake just needs to be affable as the nice guy who can win her heart and meet with her father’s approval.

Fortunately, the cast is comprised from top to bottom with performers that people like. Even the smaller roles are filled with the likes of John Goodman, Robert Patrick and Matthew Lillard. So the watchability factor here will most likely outweigh any issues people wind up having with the predictability and the mild nature of the drama. Clint Eastwood is good at this, he’s everyone’s favorite cantankerous old man. Amy Adams is a sweetheart, I don’t know anyone who doesn’t love her. So watching them play roles that are tailor-made for their traditional onscreen personas isn’t the worst thing in the world, even in a movie that plays things extremely safe.

34 thoughts on “Trouble With the Curve”